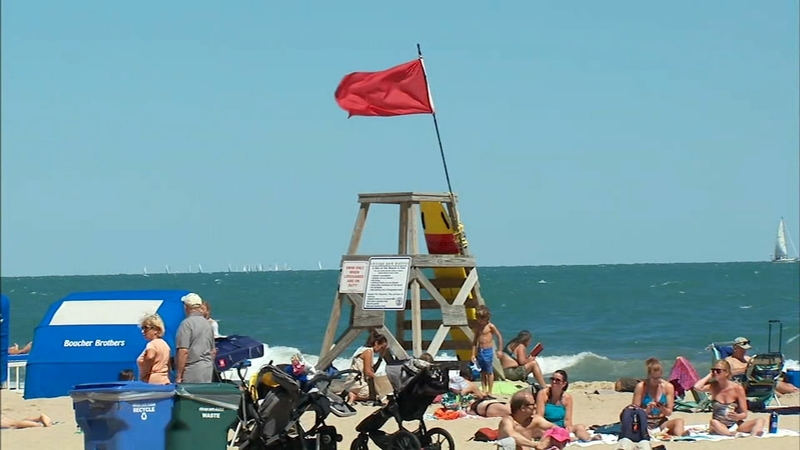 The swim portion of a Chicago triathlon for kids, the Life Time Kids Tri Chicago, was cancelled Saturday morning because of the hazardous conditions.

It's the third time Chicago beachgoers and swimmers were warned to stay out of the lake since Thursday.

The National Weather Service's warning ended Saturday afternoon, after rip currents whipped up dangerously high waves along the lakefront. But that doesn't mean it's safe to go in the water.

"It's a little disappointing. We like to come here and lay out in the sun, and then when we get heated up, we like to cool off in the water," said beachgoer Ken Malatia.

Lifeguards did their best to keep people out of the water as a majority of Chicago beaches remained under a red flag swim ban most of Saturday afternoon.

"We had a chance to be out there earlier before the lifeguards came," said beachgoer Lisa Marcotte. "Waves were definitely strong, but then once they came they kind of called everyone out of the water. Yeah, so it was definitely a bummer."

Nearly record high water levels at Lake Michigan of over 580 feet are being blamed for the death of a Blue Island man who drowned at 31st Street Beach Thursday. Rene Padilla, 35, was trying to save his 12-year-old daughter after she slipped and fell into the lake.

RELATED: Man who died in Lake Michigan was trying to save daughter, 12, who slipped on rock

The incident happened before the National Weather Service issued a beach hazard statement.

While some kite-surfers decided to take on the waters Saturday, other beachgoers enjoyed what is probably one of the last perfect summer days on dry land.