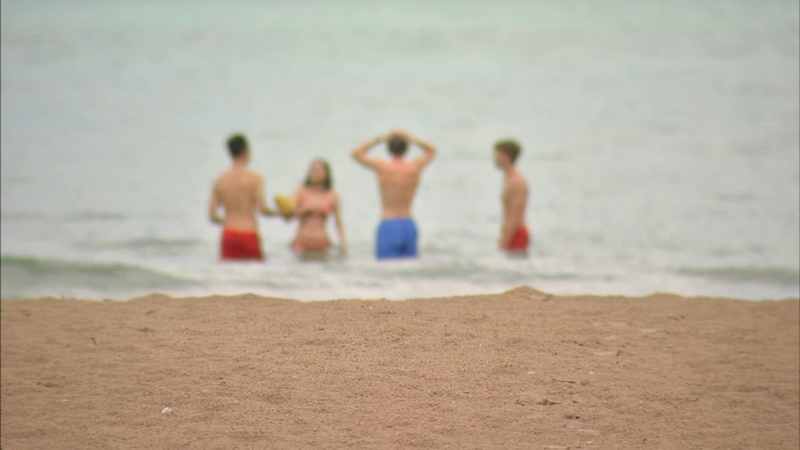 While people weren't crowding Chicago beaches on Wednesday as they did over the weekend, several groups of teenagers were seen getting into the water.

Without lifeguards on duty to watch over those who choose to swim in Lake Michigan, experts are worried it could be a recipe for disaster.

"So much of our lakefront is right up to residences where kids have access to these parks and to the beaches and to the water and we're doing nothing to protect them," said Halle Quezada of Chicago Alliance for Water Safety.

According to the Centers for Disease Control and Prevention, drowning is a leading cause of death among those age 24 and under.

On Tuesday, an 18-year-old from Plainfield died after he was pulled from Lake Michigan at Indiana Dunes State Park. The beaches there have reported much higher crowds than usual, with people coming in from Chicago.

RELATED: Indiana Dunes drowning: Teen who died after being pulled from water ID'd

There was also no lifeguard on duty at the time.

Chicago says many social distancing ambassadors are also trained lifeguards. But, they may not necessarily be in a position to help in case of trouble.

"Their backs are to the water, so it could be lifeguards serving as social distance ambassadors, but they're not lifeguarding," Quezada said. "Time matters in a drowning incident."

On Tuesday, an off-duty police officer on his boat came to the rescue of two jet skiers in trouble at 63rd Street Beach.

On Wednesday, Marine Unit officers made it clear that as long as the beaches are closed, there's danger, even for those not intending to go into the water.

"The water levels are extremely high," said Chicago Police Marine Unit Sgt. Eduardo Beltran. "A lot of the piers that over the last few years may have been completely above water level are now partially submerged and it doesn't take much wave action to be knocked off these piers."