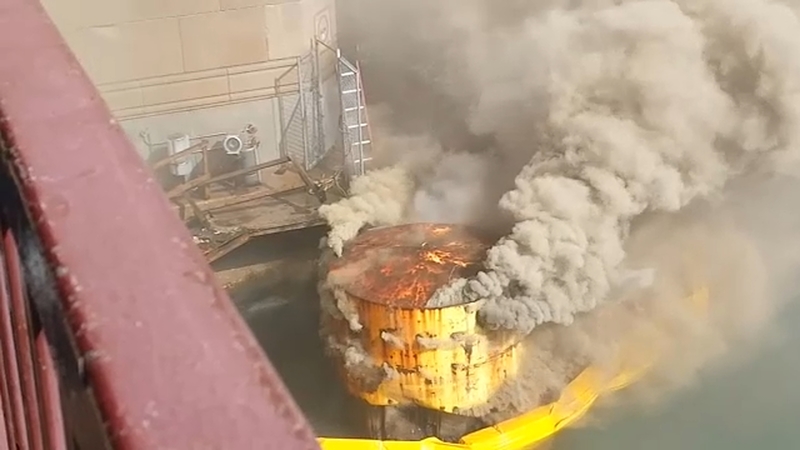 CHICAGO (WLS) -- A burning wooden piling near a construction site at the base of the Lake Shore Drive bridge at the Chicago River caused Lake Shore Drive to be temporarily closed Monday afternoon.

Fire crews responded about 10:45 a.m. to a fire at a construction site on a pier next to a pillar at the base of the Lake Shore Drive Bridge, Chicago fire officials said.

In a tweet, the fire department explained the fire was limited to a "dolphin," a piling that protects the bridge.

Officials said construction crews were attempting to take the cover of the piling off so they could replace the wood inside. The cover was stuck, so they attempted to use a welding flame to remove the bolts.

That flame apparently sparked a fire inside the structure. The inside of the piling is metal with several wood telephone poles wrapped around them to protect the bridge structure from boats. The wood is treated with a chemical, called creosote, to preserve it, which officials made the fire more difficult to extinguish.

Lake Shore Drive was closed to vehicle and pedestrian traffic, and the river was closed to boat traffic while firefighters worked to extinguish the flames.

Both street and river have since reopened, though the flames are not completely extinguished. Fire officials are trying to flood the inside of the piling to put out the last of the fire.

No contractors or fire fighters have been injured in the fire, and there was no damage to the bridge, the department said.