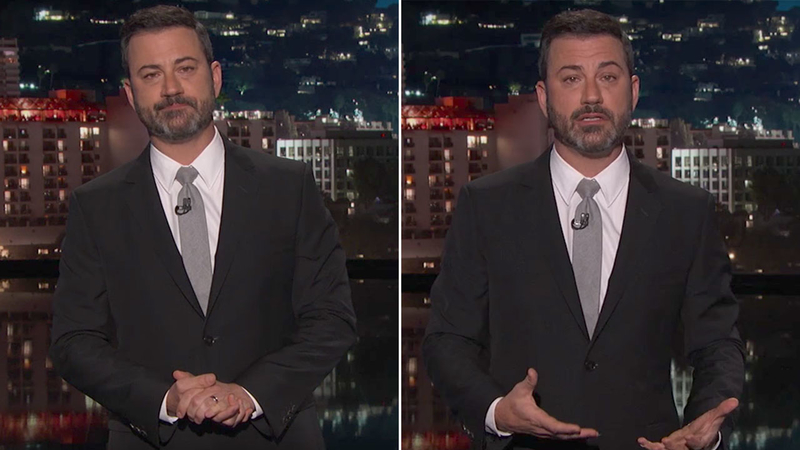 Las Vegas native Jimmy Kimmel was both visibly shaken and determined to send a message during an emotional monologue Monday night about the shooting, a "terrible, inexplicable, shocking and painful tragedy."

"We wonder why," he said, holding back tears, "even though there's probably no way to ever know why a human being would do something like this to other human beings who are at a concert having fun and listening to music."

After expressing his grief over the 59 dead and hundreds injured, Kimmel turned to what happened, talking about the shooter.

"The guy was an accountant, no criminal record," he said. "The owner of the store that sold the killer some of the rifles said he passed the government mandated background check when he was in the store and he wasn't on any watchlist. Didn't seem to be a religious or political extremist. Came out of nowhere."

Kimmel said he disagrees with people who say there was nothing that could have been done to prevent it.

"When someone with a beard attacks us, we tap phones, we invoke travel bans, we build walls, we take every possible precaution to make sure it doesn't happen again but when an American buys a gun and kills other Americans, then there's nothing we can do about that," he said.

Kimmel also said he disagrees with press secretary Sarah Huckabee Sanders, saying that after this tragedy is the time for political debate. He showed the faces of 56 senators who voted against a gun control bill days after the Pulse nightclub shooting in Orlando.

"With all due respect, your thoughts and your prayers are insufficient," he said. "We have a major problem with gun violence in the county and I guess they don't care."

Kimmel called for a different reaction this time but said he didn't expect one because of "Mitch McConnell, Speaker of the House Paul Ryan, a number of other lawmakers who won't do anything about this because the NRA has their balls in a money clip."

He compared the tragedy on Sunday to the 1980 MGM Grand fire, which killed 85 people.

"You could see the fire. I was 13 years old. I'll never forget. A man jumped out the window. It was a terrible thing to see," he said, adding that laws and fire codes were changed after five more people died in another hotel fire months later.

"Why would we approach this differently?" he asked. "It's a public safety issue."

The late night host said he wished that he could stick to comedy but felt compelled to speak out because of what is going on in the world.

"I just want to laugh about things every night, but that --it seems to becoming increasingly difficult lately," he said."It feels like someone has opened a window into hell."

Kimmel concluded by remembering those affected by Hurricane Maria and asking viewers to donate to help people affected by both tragedies.

"I'm sorry for getting emotional," he said. "I'm not great with this kind of thing, but I just -- it's important, you know."

The monologue received 4 million views on Facebook in just 8 hours.