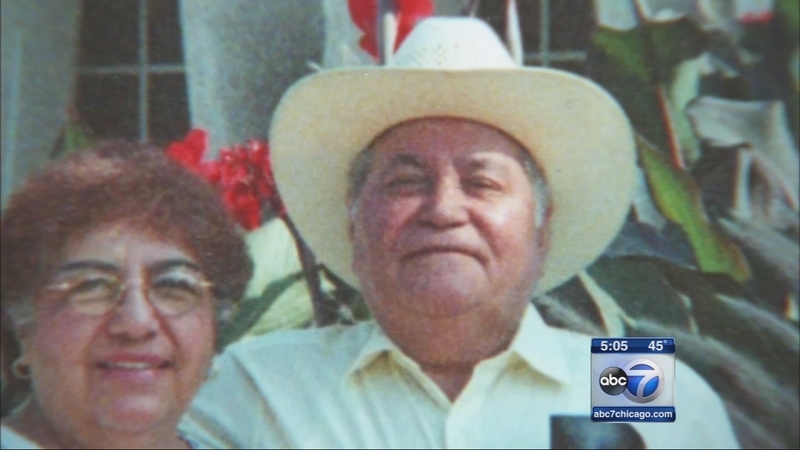 AURORA, Ill. (WLS) -- A suburban man has died after he was beaten during an armed robbery inside an Aurora social club.

Surveillance cameras inside the Latin American Club captured images of three suspects who attacked 79-year-old Felipe Garcia and a co-worker. Now, Aurora police are appealing to the public for help in tracking down the suspects.

For more than 50 years, the Latin American Club has been the social center for Aurora's Latino community. It was like a second home to Garcia, who had been a member for decades. When he wasn't working there, he celebrated many milestones there with his family.

"They shared anniversaries there. Mom and dad would go dancing on Saturday nights there," said Victoria Beltran, daughter.

But it was also the place where Garcia suffered a brutal attack that would end his life. Garcia and another man were in the club around 5:30 a.m. Sunday cleaning up from the night before when both men were beaten by three armed and masked men who came in, demanded money and made off with cash and liquor.

"They could have just robbed them and left them. They didn't have to beat him the way they did," said Guadalupe Garcia, wife.

Garcia initially survived the beating and was able to talk to his family in the hospital.

"He was joking around. His spirits were very high," Beltran said.

"We thought he was going to get up and come home to us," Garcia said.

But late Sunday night, Garcia's health sharply declined and he died. He leaves behind his wife of 50 years, five daughters, 12 grandchildren and seven great grandchildren.

The Aurora Police Department has released surveillance video stills of the suspects hoping to generate tips from the community.

"We're convinced someone out there has to know something. Such a brutal and really, a heinous crime. We're hoping they do the right thing and they come forward and talk to us," said Dan Ferrelli, Aurora Police Dept.

Garcia's family said they are planning a celebration of his life at the Latin American Club this Saturday afternoon. They said they will not be scared away from the place where they spent so many special occasions.