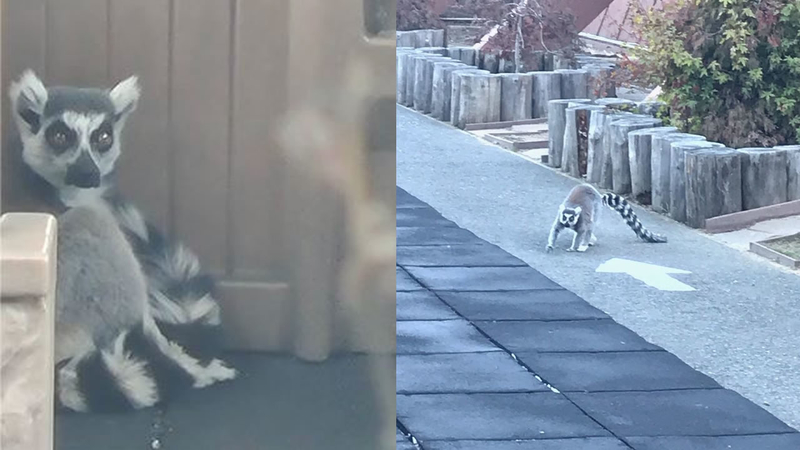 DALY CITY, California -- An endangered lemur, that police believe was stolen from San Francisco Zoo, was found by a 5-year-old boy and is now safe.

But by Thursday night, he was found at Hope Lutheran Day School in Daly City, a 10-minute drive from the zoo.

"The parents were calling and saying there's a lemur out on the playground," said Sarah Riggs, a kindergarten teacher. "He was hopping around the play structure. But ultimately, while he was waiting to be picked up, he was hiding in the plastic playhouses."

AND THE STORY GETS BETTER... YES I’M TWEET SCREAMING WITH CAPITAL LETTERS!

Doesn’t get cuter than this folks! pic.twitter.com/u77HrG4KyC

According to James' parents, their son was the first to spot Maki when his mom picked him up from school.

"I like the way they look," said James, who explained to KGO-TV news reporter Kate Larsen what Maki looked like. "Grey, black and white."

James knew exactly what to do with a wild animal on the loose. "Call the zookeeper!"

And that's what happened - animal care and control and Daly City Police showed up and safely took Maki away.

We found Maki, the stolen lemur from @sfzoo!! Around 5pm, we got a report he was in the playground area of the Hope Lutheran Church. We contained him until staff from the zoo took him back home. Here is Officer Haas with Maki.

We are grateful Maki is home safely! pic.twitter.com/U5rB2RnIxC

"Just a lot going on in the world right now, so it was good to have some good news tonight at least," said James' father Sam Trinh.

Maki was discovered missing on Wednesday morning from the zoo's Lipman Family Lemur Forest. San Francisco Police opened a burglary investigation when they discovered evidence of forced entry and damage to the enclosure.

"We do not think he escaped; we think he was taken from the zoo, but we have yet to get confirmation on either of those," said Ed Poole, chair of the San Francisco Zoological board.

Poole said because of Maki's old age, at 21, and the traumatic experience he's endured, there is some concern about the primate's health and condition.

"We certainly, absolutely hope for the best for Maki," said Poole, who explained that Maki was in the care of veterinarians at the San Francisco Zoo on Thursday night.