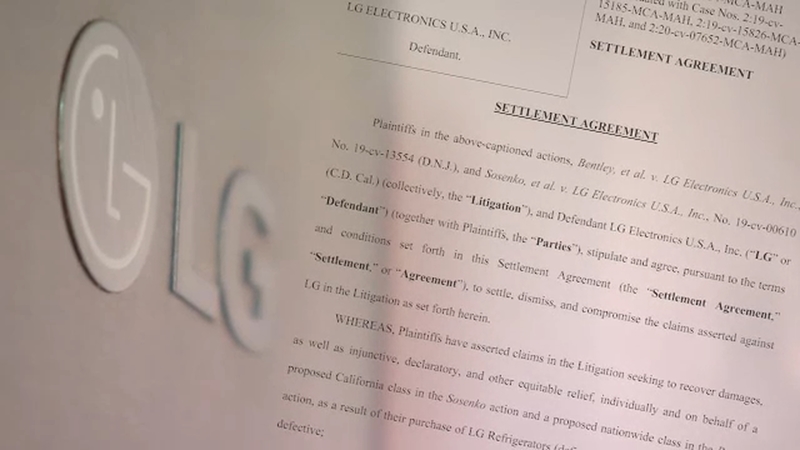 Do you qualify for money from the LG refrigerator settlement?

CHICAGO (WLS) -- If you own an LG refrigerator, you could be entitled to part of a class-action settlement.

The settlement potentially covers more than a million and a half LG refrigerators which could have problems.

Pulaski Park neighborhood resident Diane Guzzo's LG refrigerator works now, but in May she said she was trying to figure out how to keep her food from spoiling.

"We had no idea we were going to be waiting one month or pretty much close to a month," Guzzo said. "We were trying to salvage food, and whenever we would buy food we were putting it in an ice cooler.

Guzzo said they were constantly going out to buy ice to keep their perishable items cold.

Eventually, she got a check from LG for $300 to help cover the cost of food lost and the company repaired her refrigerator for free.

However, under a nationwide class-action settlement, attorneys said she could still qualify for more money because of the time she had to wait for her repair.

Attorneys who filed the suit said more than a million and a half consumers may qualify if they have one of the LG refrigerators with an alleged cooling issue covered in the settlement.

"So we saw that there was such a high volume of the same type of thing that was happening that we just researched further," said Amey Park with Berger Montague Law Firm.

The settlement payout can be anywhere from about $300 to thousands of dollars for potential repair delays, multiple repairs, or if LG did not initially cover food loss costs.

The settlement covers 60 different LG models "manufactured between January 1 2014 and December 31 2017, according to settlement records.

But how do you know if you have one of these refrigerators?

"There is a list of the covered models on the settlement administrator's website which is really easy," Park said.

A Senior Vice President for LG Electronics USA told the ABC 7 I-Team that LG "works hard to take care of consumers" if an occasional issue arises. They added that while cooling issues can occur throughout the industry, "The settlement resolves a pending lawsuit about alleged refrigerator cooling issues."

LG denied any defects but said, "...we agreed to the settlement to avoid further litigation costs and in the interest of customer satisfaction."

"And yet I, as the customer who bought the refrigerator, had to be penalized for their issue," Guzzo said.

LG added that its home appliances are enjoyed by tens of millions of Americans every day, and they're recognized by industry experts for reliability.