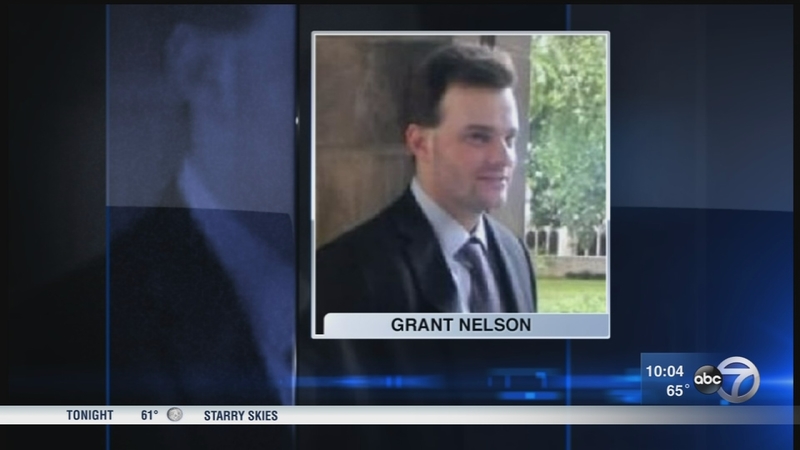 Suspect in custody after man fatally stabbed in Lincolnwood

LINCOLNWOOD, Ill. (WLS) -- A suspect is in custody after a rideshare driver was fatally stabbed in Lincolnwood Tuesday morning, police said.

The stabbing took place near the intersection of Touhy and Lincoln avenues at about 3:22 a.m., police said. The victim, identified as 34-year-old Grant Nelson of Wilmette, was transported to St. Francis Hospital in Evanston where he died later Tuesday morning, police said.

Nelson was working as an Uber driver at the time of the stabbing, police said. Nelson also worked as a Lyft driver.

A suspect is in custody after being located hiding behind a nearby building. Police said that the stabbing is an isolated incident with no further risk to the community.

Throughout the morning, Nelson's blood-spattered silver sedan remained in the intersection where the stabbing took place. It is not known what the motive was for the stabbing, a crime that has shocked those who knew Nelson.

Friends say Nelson was genuine and quick to laugh, hardly the type to be involved in a deadly encounter.

Foley was one of many who worked with Nelson in the restaurant industry, and he often drove for rideshare companies after his waiter shift. He also said Nelson sometimes spoke about the dangers of late night driving.

"I remember him mentioning that he once had to stop and get gas in a really sketchy neighborhood. He might not have really thought anything of it," Foley said.

Nelson was from Wilmette and lived with his parents, who said he had several part-time jobs over the years, recently driving for both Uber and Lyft.

Nelson's family said they don't know much about what happened, but described him as gentle and wonderful. His former co-worker agrees.

"Grant's the type of person that would walk away from an altercation. He would never stay around. He would let something go and walk away," said Milner.

A spokeswoman for Uber released a statement saying, "We are heartbroken by the loss of one of our partners, Grant Nelson. Our deepest sympathies and prayers are with his family and loved ones during this incredibly difficult time."

A spokesman for Lyft released a statement saying, "We're horrified by these reports and our thoughts are with those impacted. This type of violence has no place in our society. Our trust and safety team is looking into these reports, and we stand ready to assist law enforcement in their investigation. While the individual identified by police has driven for Lyft, there was no ride at the time of the incident."