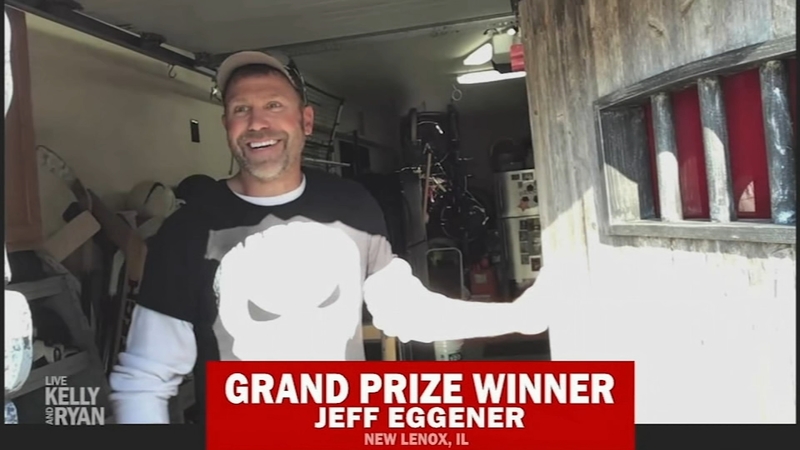 NEW LENOX, Ill. (WLS) -- A suburban man got a spooktacular surprise as he was crowned the winner of a national Halloween contest on LIVE with Kelly and Ryan.

Jeff Eggener of New Lenox thought it was just ABC7's Jesse Kirsch showing up to ask about being a finalist. But he was actually the winner of LIVE'S Spooktacular Halloween House Contest.

"You're not just being interviewed by Jesse for the local news. You're actually our grand prize winner. Congratulations!" Kelly Ripa said.

Eggener was stunned to find out he won a Hawaiian vacation worth about $9,000.

He quickly became emotional as he took Kelly and Ryan - and the audience - on a tour.

"You guys got me because I had no idea," Eggener said. "I thought if anything we might be fourth or we didn't make the top five."

His wife Nicole will tell you he's a carpenter who loves his job.

"He's worked really hard," she said. "He's super creative, which you can see, super talented so it's actually it's actually really cool. He deserves it."

And in the middle of it all, there's a spooky photo op that's now a champion's throne. Clearly, there was enough here to put him ahead of the competition. After winning that big vacation, Eggener said he's feeling grateful and honored.