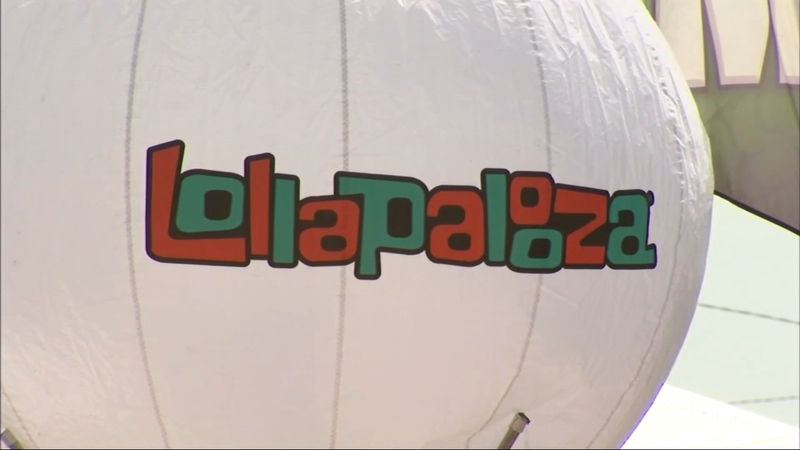 CHICAGO (WLS) -- Heading to Lollapalooza next weekend? Here's everything you need to know, from street closures, to public transit information, to location and more.

Lollapalooza take place in Grant Park from Thursday, August 1 through Sunday, August 4, from 11 a.m. to 10 p.m. each day.

Ticketholders can enter the festival up to three times per day. Belongings and persons will be searched each time they enter festival grounds.

Click here to see the Lollapalooza lineup by day.

HOW DO I GET TO LOLLAPALOOZA?

Attendees are strongly encouraged to take public transportation, and both CTA and Metra will be providing extra service all four days.

CTA is adding service on rail lines and various bus routes to get concertgoers to Grant Park. Riders can purchase 3- or 7-day unlimited ride passes, or load up their Ventra cards to pay for fares.

There will be longer and/or more frequent trains on the Red, Brown, Blue, Green and Orange Lines, and Yellow Line service hours have been extended to 1 a.m. on all four days of the festival.

Metra will provide extra trains, expand passenger capacity and adjust schedules on most lines to accommodate the anticipated increase in ridership. Metra and CTA will also place signs at Union Station and Ogilvie Transportation Center directing riders to the appropriate CTA bus route to get to Grant Park. Buses on those routes will have Lollapalooza signs in their windows.

Metra is offering a two-day Lollapalooza train pass valid for unlimited rides on August 1 and 2. The pass is $10 before August 1, and $15 if purchased during those days. Metra recommends anyone going to Lollapalooza ride after 9:30 a.m. on Thursday and Friday, so they miss rush hour congestion.

If you are driving, 24-hour parking is available at the four Millennium Garages near the park. For the best rates, reserve parking in advance online.

There is a designated Americans with Disabilities Act (ADA) pick up and drop off location on Monroe at Columbus Drive. There is no parking at that location.

There is also bicycle parking just south of the main entrance at Michigan and Ida B Wells.

Street closures for Lollapalooza 2019 go into effect on Monday, July 29, and last one week until August 5.

WHAT CAN AND CAN'T I BRING TO LOLLAPALOOZA?

Bags are restricted to small purses, totes and drawstring bags only. Strollers, binoculars, blankets, sheets, towels, sealed sunscreen (not aerosol), empty hydration packs and water bottles, and prescription medication are among the items allowed into the festival.