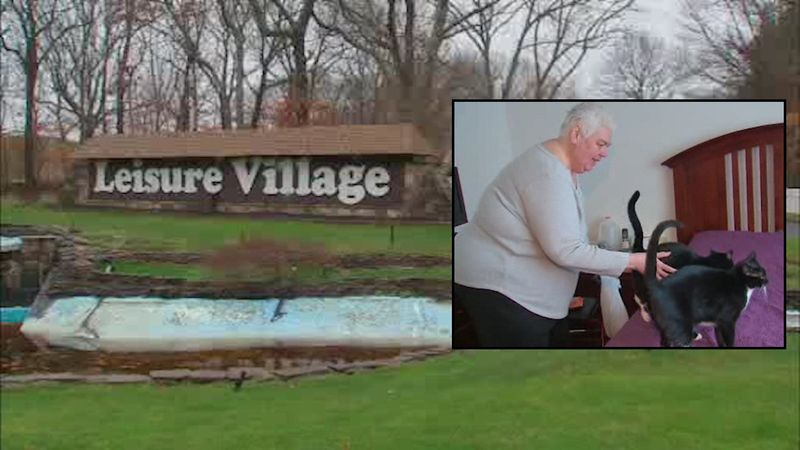 RIDGE, Long Island -- A condo owner on Long Island says she's says being unfairly targeted by her condo association, and her two pet cats could end up paying the price.

She says she's being told to pay thousands of dollars in fees for an animal that she says the association knew about all along.

"These cats are my children. I don't have any children. I'm not married. They're my life," said Elizabeth Colaianni, the condo owner.

Fighting back tears, 58-year-old Colaianni described how her condo would charge $10 more per month if she had an extra person in there, but for an extra cat, it's hundreds more per month!

Elizabeth has had Rocky and Micky since 2008. That's when she moved into her condo in Leisure Village, an adult community in Ridge for ages 55 and up.

She says even though she knew about the limit of one cat per household, no one cared about her kitties during her first four years there.

But in 2012, Elizabeth suddenly became disabled and had a ramp installed.

"I honestly feel that it's retaliation because I put the ramp in," Elizabeth said.

She says that retaliation happened in the way of fines. The fines now total more than $11,000 for an extra cat.

"Every six months I'll get a legal fee that they want me to pay a percentage of that also," Elizabeth said.

Now Elizabeth says, aesthetically this ramp really shouldn't affect anyone. Her condo sits on the corner, right at the edge of the property. There's a fence to the main road.

"So the ramp is approved by the condo board?" Eyewitness News Reporter Stacey Sager asked.

As for those legal fees, Leisure Village has an attorney all right. They referred Eyewitness News to him.

When we asked them to comment on the fines, he called us back saying it was an ongoing legal matter, and then hung up when Eyewitness News tried to ask more questions.

As for Elizabeth, she's now filed a complaint with Housing and Urban Development; she also has a doctor's note describing her cats as "emotional support animals".

"If I didn't have them, I don't know what I would do. It would be horrible," Elizabeth said.

She hopes that by sharing her story, someone at Leisure Village can reverse a living situation becoming more and more costly by the day.