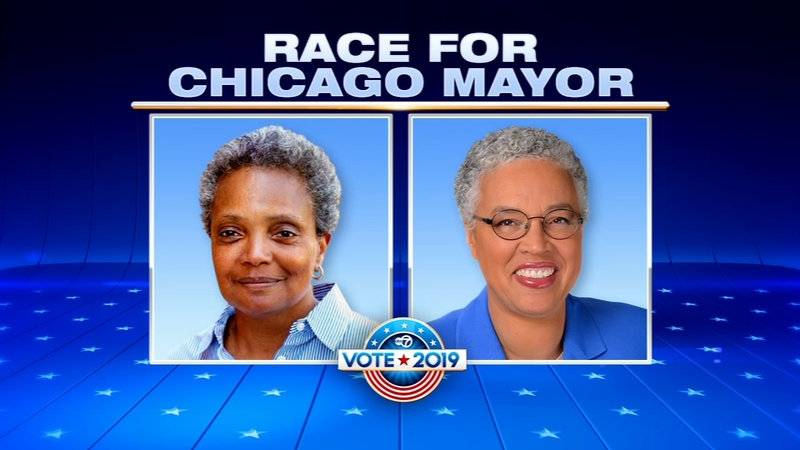 CHICAGO (WLS) -- Churches are expected to be a major focus Sunday for both Toni Preckwinkle and Lori Lightfoot as the Chicago mayoral race enters its final weekend.

The candidates have over a dozen stops at religious institutions on the agenda between the two of them.

Both candidates met with faith leaders Friday behind closed doors at Apostolic Faith Church in Bronzeville. The meeting provided a chance for both Lightfoot and Preckwinkle to get their message out to those leaders' congregations, which consist of constituents from across the city.

Toni Preckwinkle also toured the new Pullman Community Center before taking part in an economic round table Friday afternoon. Preckwinkle took the opportunity to discuss the importance of forums like the one at Apostolic Friday morning.

"I think it's really important to stay in touch with the faith-based community, to hear what the concerns of their parishioners in their communities are," Preckwinkle said. "And to share with them what you're doing."

"Something that was emphasized in our discussion is the importance of focusing on the poor," said Reverend Watson Jones III of Compassion Baptist Church of the forum.

Reverend Jones said the candidates were cordial and a summary of their discussion will be typed up and given to the pastors in attendance.

"We're going to disseminate that among our circles and to be able to let our congregations know what was said in this forum, in the settings that they can be able to make an informed decision, free decision from us," Rev. Jones said.

As of Thursday night, 75,000 people had voted early. Representatives of the Chicago Board of Elections said the busiest days are ahead.
"This is the big weekend, where it tends to be an uptick," said Jim Allen of the Chicago Board of Elections. "Especially on Monday, we should see roughly nine or 10,000 a day through the weekend, and as many as, hopefully north of 20,000 on Monday the last day before Election Day."

Voter turnout is expected to be similar to the February 26th election.

Although Lightfoot has a big lead in recent polls, Preckwinkle sees her ground game as the key to victory.

"We have a strong ground game. Throughout this campaign, we've been the only campaign that does," Preckwinkle said.

Preckwinkle is planning to visit ten churches on Sunday and then hold a rally that afternoon.

"It's packed, jam packed with events and activities," said Preckwinkle of her weekend schedule. "And as I said, we've got 10 churches to go to on Sunday, and I am very encouraged by the response and get it out in the community and with the congregations."