Machete robberies Chicago: There have been at least 8 encounters with person wielding weapon
WLS
By Karen Jordan and Stephanie Wade 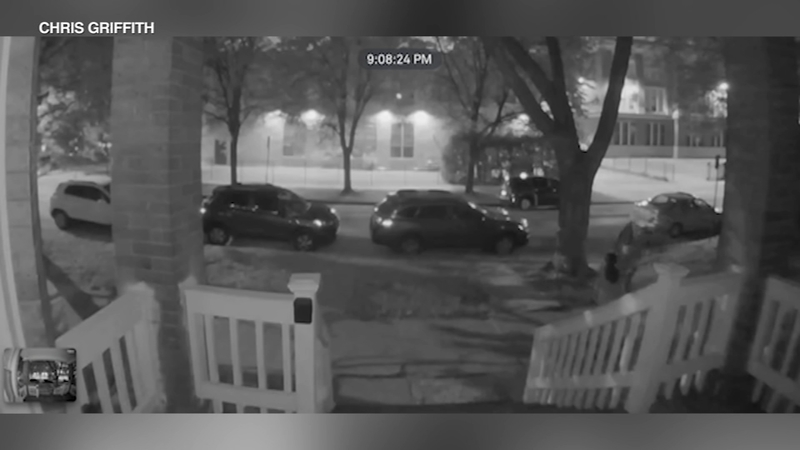 CPD speaking to person of interest in NW Side machete robberies

CHICAGO (WLS) -- Chicago police are speaking with a person of interest Tuesday in a series of armed robberies involving a man wielding a machete.

Residents were warned over the weekend by a community alert from CPD about the armed robberies.

One of them, from Friday night in Avondale, was caught on security camera. The video shows a man in a silver car pulling over in the 3300-block of North Monticello. He gets out when a woman walks down the street, approaches her demanding her property which she appears to give to him, and then drives off.

News of the robbery spread fast through the neighborhood, prompting Chris Griffith to check his Nest camera.

"I was just looking to see if there were any cars going down the street and was shocked to find out that it happened right on our steps," he said.

The robber is connected to at least eight incidents, Chicago police said.

One victim, who asked to remain anonymous, said he encountered the suspect on the night of Memorial Day in the 2800-block of North Francisco Avenue. He said a man in a dark hoodie charged at him with a machete and then stood over him as he fell.

He said he didn't have his wallet and pleaded with his attacker, who patted him down, took his phone and then fled in a silver or gray sedan.

In the most recent incident, a 52-year-old man walking on the sidewalk in the 3700-block of North Troy Street at about 9 p.m. Sunday night, police said.

The victim's wife, who asked not to be identified, said her husband was on his way home and carrying a box of pizza when the suspect approached and demanded his property.

She said her husband first thought he could overpower the suspect, who he described as having a small build, until he saw the giant knife.

"It was very scary because he told me, 'I think of my daughter because she's little,'" she said.

The suspect attempted to strike the victim with the machete, which caused the victim to fall to the ground, police said.

She said her husband ducked the suspect's swing and fell.

The victim then threw his wallet into the street to distract the suspect and ran from the scene, police said.

In the wallet was money her husband had been saving up to pay for his young daughter's birthday presents.

She also said the suspect may have had an accomplice because he grabbed her husband's wallet and jumped into the passenger seat of a silver car, which sped off.

Police have not said if the robbery is related to other robberies involving a machete. Chicago Police Superintendent David Brown said the common weapon is enough for police to believe they are likely related.

"We're expending all of our resources to capture this person as soon as possible. Obviously, we're concerned like every resident is that this violent person is using a weapon like a machete," Brown said.

Other robberies occurred in the: