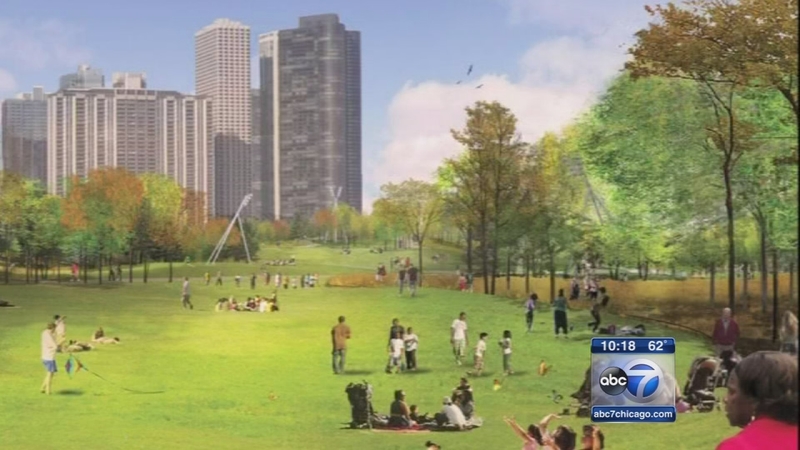 CHICAGO (WLS) -- Building a park on top of a parking garage is an engineering question whose answer rests with the new Maggie Daley Park on Chicago's lakefront.

In the shadow of towers made of concrete and steel, there are building blocks of a different sort. Thousands of them are being layered together to give shape to what will be Maggie Daley Park.

"We're going to transform what was a flat, sort of uninviting area into a gem for Chicago that compliments Millenium Park," said Chicago Park District CEO Michael Kelly.

That transformation has a lot to do with topography. When this 20-acre park is done, its northeast corner will sit 30 feet higher than the southwest. That's a lot of dirt. And dirt weighs a lot. And a lot of weight would not be welcome atop the two story parking garage that sits directly underneath. So, what do you use? Geofoam.

It's 100 times lighter than soil. Geofoam isn't a new concept. It was used here before, but there's a lot more of it now, 75,000 cubic yards of it will be sculpted and tacked down to create a rolling terrain.

"That's essentially the best compliment we could get once this park is open and that is that people don't realize that it's a park constructed on top of a garage," said project engineer Nichole Sheehan. "It's a park that people are going to love and hopefully come to all the time."

The park district has been recording its birth with time lapse camera, from barren garage roof to the building of baby hills, and when the park's soft opening comes next fall, this is the vision. Three of the 20 acres devoted to a children's playground. Just up the path, a 25 foot climbing wall, and when the cold months come, a feed of built in refrigerant will convert that path into a 400 meter ice skating ribbon - attracting old Hans Brinkers or perhaps young Blackhawks.

From debris dating back to the great Chicago fire to geofoam, this piece of Chicago has undergone remarkable change over the years.

In the late 40's and early 50's, there were lots of railroad, lots of parking that over the years goes went away or went underground.

Maggie Daley Park carries a roughly $55 million price tag. Most of that comes from parking garage lease money and private contributions along with five million in park district capital funds.