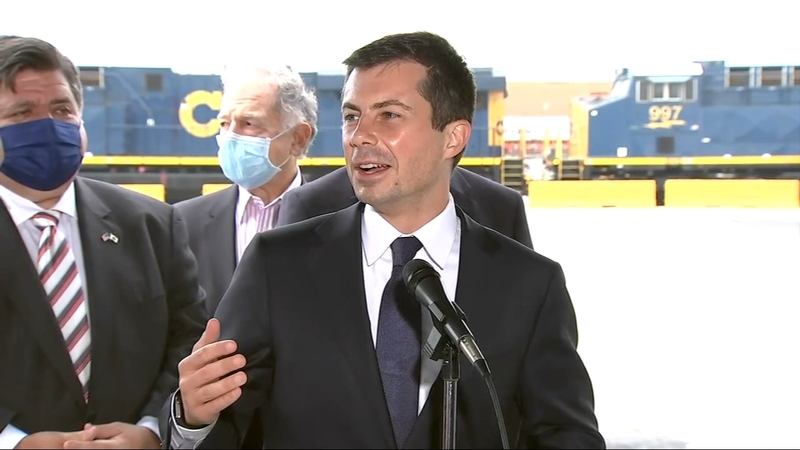 BEDFORD PARK, Ill. (WLS) -- Secretary of Transportation Pete Buttigieg got an up close look at some of the biggest transit construction projects in the Chicago area.

Buttigieg touted his boss' infrastructure plan while touring two different sites Friday. He stopped at the CSX intermodal rail yard as he wraps up a three-state blitz to promote the Biden administration's plan.

Buttigieg joined Gov. JB Pritzker and other local and federal officials for a bus tour of the CSX rail and truck yard.

"We are here today to highlight the American jobs plan, the infrastructure bill that will help to rebuild all of the United States infrastructure, so important for the State of Illinois because we're the crossroads of America," Gov. Pritzker said.

"It is time after far too many infrastructure weeks that turned into punch lines. It is time to actually do it, and that's what Democrats and Republicans across the country believe we ought to do," Buttigieg said.

Earlier, Buttigieg joined Mayor Lightfoot and other elected officials to tour the 95th Street Red Line Station. Chicago is counting on federal dollars to complete the extension of the Red Line down to 130th Street. Buttigieg promised Chicago will be in line for significant federal dollars.

"This is exactly the kind of project that there would be more resources for if we got this bipartisan framework through," Buttigieg said.

"Trust that we will be doing the right things on behalf of our residents to make sure that those federal dollars have catalytic and transformative effect on our city," Mayor Lori Lightfoot said.