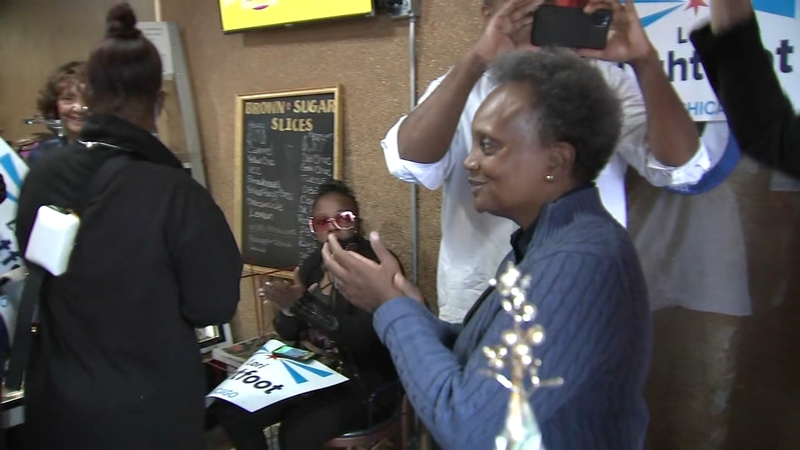 She made a series of stops, mostly on the South and West Sides. Lightfoot is eager to take on a second term while taking on her critics.

She shook hands with supporters at the Starlight Restaurant this morning. They wore buttons and put up posters saying "I'm riding with Lori." The mayor implored them to join her in the fight for a second term.

"The road isn't going to be easy. But nothing good and worthwhile is. I need you to be on that ride with me. I need you to fight with me every single day," Lightfoot said.

Then she went over to Brown Sugar Bakery on the South Side and Catedral Café in Little Village. Her final stop was at The Revolution Workshop, a job training center in Garfield Park.

"Obviously we've got to make sure we continue to do everything that we can to make public safety the priority, period. But in a way in which we do that is looking for community driven resources and solutions," Lightfoot said.

In a highly-produced campaign video , Lightfoot said she's a fighter who's ready to fight for Chicago for another four years.

"The fact is because of you, Chicago is coming back. When we got knocked down by COVID, we came together as a city and we got right back up because that's who we are and that's how we've been able to make so much progress despite all that's been thrown at us," she said.

In addition to the pandemic, her biggest challenge might be the perception by many that crime is out of control.

In just the past week, two Chicago police officers and a U.S. Marshall were shot in the city.

"Crime issue is her Achilles heel. That's one thing that she is going to have to answer for at all costs. That is the biggest concern that I'm hearing from voters," said ABC political analyst Laura Washington. "That's an issue that touches every voter in the city, and she's going to have to address that one head on."

Some of those challenges are why her supporters believe she needs another term.

"I think she's done a great job," said Eraina Nicholson. "I think she's had to deal with a lot as a mayor in the City of Chicago and I think an additional four years would help her complete some of the things she's started."

Earlier this week, she riled many in the criminal justice system with a comment.

The mayor is facing backlash from comment she made about accused criminals needing to be locked up.

"Given the exacting standards that the state's attorney has for charging a case - which is proof beyond a reasonable doubt - when those charges are brought, these people are guilty," Lightfoot said Monday.
Cook County Public Defender Sharone Mitchell Jr. noted Chicago's history of wrongful convictions and false confessions said the mayor was just wrong to equate charges to guilt before someone even goes to trial.

"The Cook County Public Defender's Office, in the last calendar year, have represented folks in over 10,000 cases where there was a finding of not guilty or charges were dismissed," she said.

Without naming Lightfoot, the county's chief judge issued a statement saying, "a recent claim that all those accused of violent crimes are 'guilty' and should be in jail prior to trial is wrong on both the law and the facts."

But with six challengers already in the race, the ACLU said the mayor was doing some political posturing in an election year.

"It's really sad to see someone who, you know, as well trained as a lawyer and a former prosecutor, elevate politics over constitutional rights in the way that the mayor did," said ACLU of Illinois Communications Director Ed Yohnka.

A former top prosecutor defended the mayor's underlying message and believes she let her emotions get the best of her.

"I know as a fact she worked on wrongful convictions is acutely aware of the presumption of innocence. I don't think the public should beat her up too much on this she let the emotions get the best and she knows," Former 1st Assistant Cook County State's Attorney Bob Milan.

The mayor is already facing half a dozen challengers, including candidate Willie Wilson.
"Her tenure has been marked by a failure to curtail the violence in our city," Wilson said.

Some 250 supporters of Lightfoot attended a private campaign fundraiser in River North.

"Basically, she's got more work to do," said Alderman Jason Ervin, 28th Ward. "But I thought the mood was great kicking it off, and I think it's a good thing."

The Republican National Committee released a statement in response to Lightfoot's announcement.

"Hundreds dead, out-of-control violent crime, and $6.00 per gallon gas is the reality Chicagoans live with daily. Lori Lightfoot is living in an alternate reality if she thinks her track record will stand up in a bid for another term as mayor," said RNC Spokesperson Preya Samsundar.

Six other candidates have announced their mayoral run.