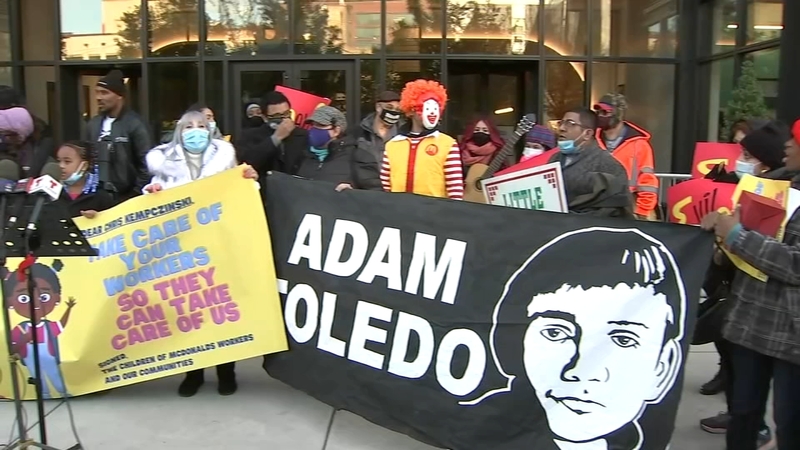 CHICAGO (WLS) -- Demonstrators called out the CEO of McDonalds Wednesday for a text exchange he had with Chicago Mayor Lori Lightfoot where he said the parents of two murdered children failed them.

Protesters marched on McDonald's headquarters in Fulton Market demanding the CEO resign, and that the company treat workers better.

Demonstrators, including one wearing a Ronald McDonald Halloween outfit, descended on McDonald's Headquarters to protest comments made by company CEO Chris Kempczinski about the killings of Adam Toledo and Jaslyn Adams last spring.

Toledo was shot by police after running down an alley with a gun in his hand, which he dropped before being shot.

Adams was gunned down in the drive-through of a West Side McDonald's when two men opened fired on their vehicle. Her father, who police called a known gang member, was also wounded.

The next day, after Mayor Lori Lightfoot visited McDonald's corporate offices and met with Kempczinski, he texted her and referenced the shootings, saying: "With both, the parents failed those kids, which I know is something you can't say. Even harder to fix."

Lightfoot did not respond directly to those comments, but texted back "Terrible tragedy" in reference to the McDonald's shooting.

"It is unacceptable, ignorant and racist that the CEO of McDonalds can put this responsibility on the families," 25th Ward Ald. Byron Sigcho Lopez said.

The mayor's spokesperson issued a statement in response to the release of the texts, saying, in part: "Victim shaming has no place in this conversation."

"We don't want you to talk bad about Adam Toledo's family or Jaslyn Adams' family," 8-year-old Apollonian Jackson said during the rally.

Protesters also brought with them fake Happy Meal boxes with messages critical about McDonalds. They also used the rally to raise the issue of pay.

"The parents of Chris failed him by raising a son that makes over $10 million a year but cannot pay the hardest of his workers at least $15 an hour," said Graciela Garcia, Little Village Community Council.

But another alderman said the protest was misguided in calling out the McDonald's CEO.

"I don't think there should be an uproar over what he said. The uproar should be about the fact that in many of these situations that have made headlines in the city of Chicago, it is a fact that parents are failing their children," said Ald. Ray Lopez, 15th Ward.