Meet a professional dumpster diver who made $100K in a year 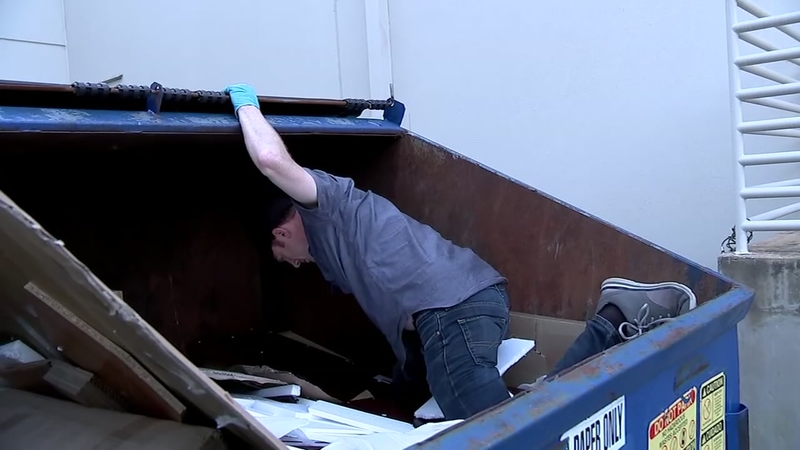 HOUSTON, Texas -- Turning trash into treasure -- some retailers have been estimated to throw away $50 billion worth of merchandise a year. One Texan is taking their waste to the bank, making big bucks on dumpster diving.

Matt Malone is what you'd call a professional "dumpster diver." He says he can bring in a considerable amount of cash on the side.

He lives in Austin but travels the country to get some unique finds. He made a trip to Houston to show us his strategy.

He stays away from restaurants and food trash. Malone's treasure trove lies behind big box stores like Home Depot, Office Max or Sears.

"When you take something back to a store, what do you think they're doing? Put it back on the shelf? Look on the shelves and tell me how many re-boxed or repackaged things (you see). Not many, so they throw them away," said Malone.

Once they're tossed, Malone dives in.

He inventories his finds and posts them for sale on sites like Amazon, eBay and Craigslist.

"Worst case scenario, you're having a yard sale," said Malone.

"I found an original Muhammad Ali painting that was done for a book by his daughter," said Malone of one of his most unique finds.

On our adventure in Houston, he found a brand new table behind Pier One Imports. He also found computer speakers, a Dewalt cordless screwdriver, commercial grade LED lighting, credit card readers, and a Mac Classic 2 computer, which could sell for $100 or more on eBay.

The biggest find was a brand new cherrywood desk with everything in the box. It retails for close to $300.

Aside from products, Malone has come across personal information.

"I found Donald Trump's cell phone number. Someone had thrown away a Rolodex and it was a big wig obviously," said Malone.

He was in Los Angeles at the time.

"We actually called Donald Trump. At the time, he wasn't the president," said Malone. "Uh, they basically told me not to call again."

When we asked Malone if anyone had caught him in their business' dumpster, he said "yes."

After making an inventory of everything, Malone estimates he can sell his Houston finds for a little over $3,000. Not bad for putting in a few hours of work.

While Malone makes a lot of money with his dumpster diving side hustle, Waste Management, a refuse collection company, cautions against it.

They sent us the following statement:

"Tragedy can strike when people climb into waste dumpsters even for a short period of time. A dumpster is not a safe place to seek shelter, sleep or hunt for treasures. If someone is inside a trash or recycling dumpster when it is emptied into a truck, there is a significant risk of injury or death. We encourage everyone in the community to be an extra set of eyes and ears, and if you see signs that your dumpster may be used for anything other than waste service, please contact local police or social service agencies to prevent a tragedy."
Report a correction or typo
Related topics:
personal financetexasgarbagemoneysocietyu.s. & world
Copyright © 2022 KTRK-TV. All Rights Reserved.
TOP STORIES
CPD shoot, critically injure man in Lower Wacker shooting; 2 arrested
2 semis crash on Dan Ryan; Driver seriously injured
FBI: QR code scams on the rise
CPS teacher killed in murder-suicide was active in violence prevention
Longtime Lombard couple spends final days together battling COVID
2 charged with murder of 8-year-old girl in Little Village: CPD
What to know about the judge viewed as Biden's top Supreme Court pick
Show More
4 steps to take before Fed raises interest rates
More Chicago, suburban testing centers under investigation
Brothers tortured by Jon Burge still picking up pieces of lives
Scientists monitoring new omicron subvariant BA.2
Man released from prison after twin brother confesses to murder
More TOP STORIES News