'Menchito,' son of Chicago's most wanted fugitive 'El Mencho,' extradited from Mexico to US 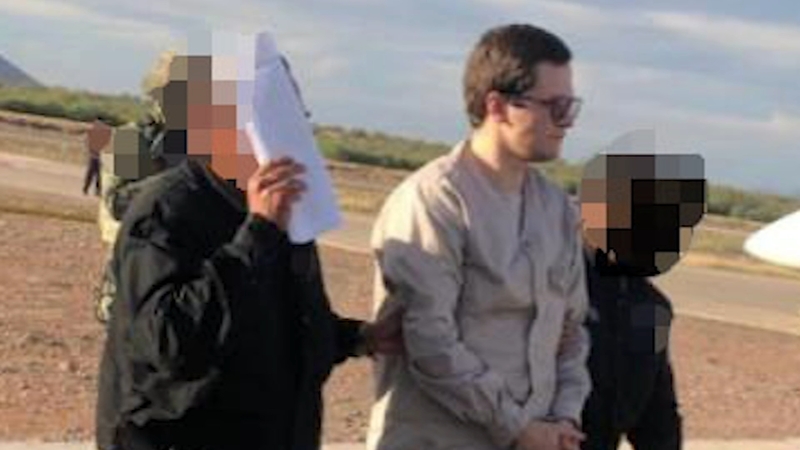 'Menchito,' son of Chicago's most wanted fugitive 'El Mencho,' extradited from Mexico to US on drug trafficking charges

CHICAGO (WLS) -- If Chicago's public enemy No. 1 in the war on drugs can't be caught, then his son may be the next best target.

Gonzalez, 28, known as "Menchito," is the son of Nemesio Oseguera Cervantes, the feared and fugitive leader of the New Generation cartel that now controls a majority of illicit drugs sold in Chicago.

Cervantes, who's called "El Mencho," currently has a huge U.S. government bounty on him and has been described by federal drug enforcement agency officials as Chicago's "public enemy No. 1."

While "El Mencho," 52, continues to evade and elude capture in Mexico, his son was considered the No. 2 highest ranking New Generation cartel boss even though he was arrested in 2015.

Menchito, an American citizen born in San Francisco, managed to fend off extradition to the U.S. for five years, in large part by claiming that he wasn't the person authorities said he was. He provided Mexican officials with a birth certificate showing he was someone else, not American and born of different Mexican parents.

That ruse ended for good on Friday when U.S. officials executed an extradition warrant and retrieved the accused cartel major-domo from Mexico. He faces a two-count indictment in Washington on charges of drug trafficking and possession of a machine gun.

"Taking off one or two even significant targets makes a difference" said Bob Bell, special agent in charge of the Drug Enforcement Administration in Chicago."But to really impact the organizations, we need to treat these transit national criminal organizations the same way we treat drug trafficking organizations and completely dismantle those organizations. That would really make a lasting impact," Bell said during an interview with the ABC7 I-Team last fall.

With El Mencho still in the wind, Bell and other U.S. counter-drug officials remain intent on finding him and bringing the drug overlord to justice. There is currently a $10 million reward for information leading to his arrest.

"Well there's no doubt of that, because he leads one of the most powerful cartels in Mexico and he's important for us to look at and look at hard," Bell answered.

Drug investigators had little time to celebrate the final fall of Joaquin "El Chapo" Guzman, who's arrest, extradition, prosecution and life sentence opened the door to a new head of the snake: El Mencho. With his son now on American soil and facing prosecution here, authorities hope they can tighten the screws on El Mencho - and eventually bring him to face charges in the U.S.