Community groups call on mayor, governor to save Chicago's Mercy Hospital from closing amid pandemic 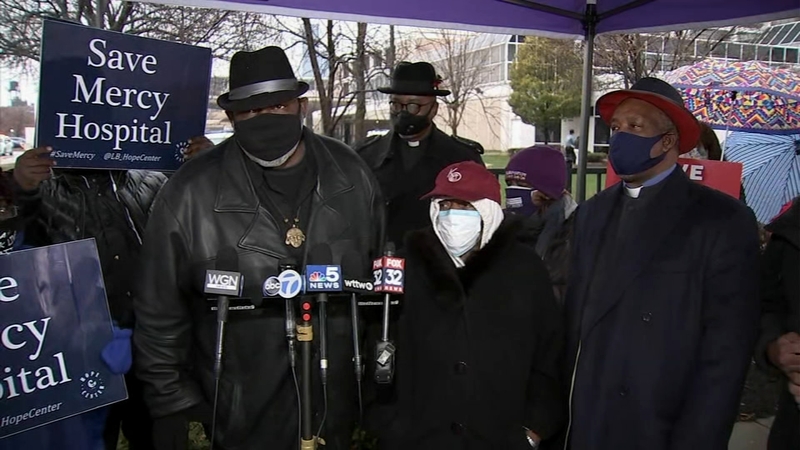 Protestors call on mayor, governor to save Chicago's Mercy Hospital

CHICAGO (WLS) -- If a suitable buyer isn't found, Mercy Hospital would be the fourth hospital on Chicago's South Side to close in recent years.

Community and faith-based groups came together Tuesday to protest the looming closure of Mercy Hospital in the Bronzeville neighborhood. They called on Illinois Gov. JB Pritzker and Chicago Mayor Lori Lightfoot to intervene to save the city's oldest and first teaching hospital.

Mercy would be the fourth hospital on Chicago's South or West sides to close since 2018.

Located on the city's South Side for nearly 170 years, Mercy serves a population of mostly low-income residents, the elderly, and people of color.

"It's important that the Black community be at the table because we are sick and tired of being on the table with a sheet over us," community activist Father Larry Dowling said.

"We're in a global pandemic, so why would you close the only hospital that services low-income and working families?" said Ald. Jeanette Taylor, 20th Ward.

Community organizer Jitu Brown of Journey to Justice said the shuttering of the hospital will create a healthcare desert. The closest hospital is miles away.

In July, hospital owners Trinity Health announced they would close the facility in 2021, citing millions of dollars in operational losses.

State Representative Lamont Robinson (D-Chicago, 5th District) is calling for a moratorium on hospital closures until after the pandemic is over and for Illinois' governor to get involved by helping to get mercy's closure date moved back.

"Friends, there is money in the state coffers to keep mercy hospital open," Robinson said.