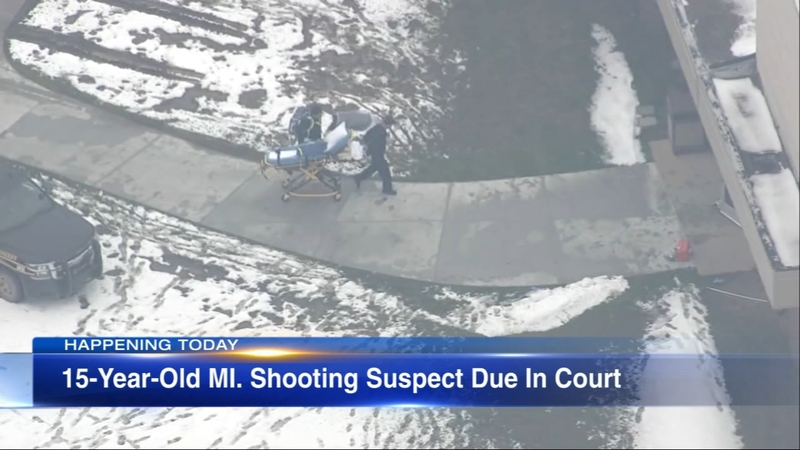 Ethan Crumbley, the teen suspect charged in connection with a deadly shooting at a Michigan high school last month, is expected to appear at a probable cause hearing Monday afternoon, CNN reported.

The gunfire at Oxford High School on November 30 left four students dead, while seven others -- six students and a teacher -- were injured.

Crumbley, 15, is charged as an adult with one count of terrorism causing death, four counts of first-degree murder, seven counts of assault with intent to murder and 12 counts of possession of a firearm during the commission of a felony.

The judge entered a plea of not guilty per a request from Crumbley's attorney during an arraignment December 1.

Crumbley's parents were also charged in connection with the shooting. James and Jennifer Crumbley each face four counts of involuntary manslaughter and have pleaded not guilty. They are scheduled to appear in court for a separate hearing Tuesday.

Surveillance cameras at the school captured much of the violence, prosecutors have said.

Just before 12:51 p.m. the day of the shooting, Crumbley could be seen with a backpack, then a minute or two later, he exited a bathroom without the backpack but with a gun in hand, Prosecutor Marc Keast said during Crumbley's arraignment.

"What is depicted on that video, honestly judge, I don't have the words to describe how horrific that was," he said.

This continued for another four or five minutes, and Crumbley eventually went to another bathroom, Keast said.

When deputies arrived, the suspect set down the gun and surrendered, officials have said.

As classes resumed after the long Thanksgiving holiday, a teacher noticed Ethan Crumbley searching the web for ammunition, according to Karen McDonald, the Oakland County prosecutor who is leading the case.

The teacher notified school officials, who contacted the parents via phone and email, but they did not respond.

Later on Monday, Jennifer Crumbley sent Ethan a text message saying, "LOL I'm not mad at you. You have to learn not to get caught," McDonald said.

On Tuesday morning, the day of the shooting, another teacher found a drawing on Crumbley's desk which essentially depicted a shooting, McDonald said. It "alarmed her to the point that she took a picture of it on her cell phone," the prosecutor said.

The illustration showed a "semiautomatic handgun pointing at the words 'the thoughts won't stop help me,'" and it included a drawing of a bullet with the words "blood everywhere" written above it, McDonald said. The words "my life is useless" and "the world is dead" were also written on the drawing.

The distressing picture led school officials to hold a meeting with the accused shooter and his parents, who were instructed to help provide counseling for their son within 48 hours, school officials have said.

The parents resisted the idea of taking their son out of school, McDonald said, and he was allowed to return to the classroom.

Oxford Community Schools Superintendent Tim Throne said because the suspect had no prior disciplinary actions on his record, school counselors decided to allow him to return to his class, rather than send him to what they thought would be an empty home.

"While we understand this decision has caused anger, confusion and prompted understandable questioning, the counselors made a judgment based on their professional training and clinical experience and did not have all the facts we now know," Throne said in a letter to the school community.

Crumbley's parents are being held on $500,000 bond each for the involuntary manslaughter charges.

Prosecutors accused the pair of giving their son unfettered access to the gun he's accused of using in the school shooting.

McDonald has alleged James Crumbley bought the gun at a store in Oxford on November 26, and the parents gave the weapon to their son as an early Christmas present.

During the parents' arraignment, McDonald said, "It's ... clear from the facts that (Ethan Crumbley) had total access to this weapon," and the parents "didn't secure (the gun) and they allowed him free access to it."

James Crumbley shook his head as McDonald made both statements.

One of the parents' attorneys, Shannon Smith, countered during the hearing that "the gun was actually locked."

"When the prosecution is stating that this child had free access to a gun, that is just absolutely not true," Smith said. "This court is going to see ... there is far more going on than what this court has been made aware of."

The Crumbleys were arrested following a manhunt that began when they failed to show up to court for their initial arraignment on December 3.

Early the next morning, police said they found the couple on the first floor of a commercial building in Detroit -- some 40 miles south of the Oxford area where they live -- after someone tipped police Friday night their vehicle was nearby.

"They appeared to be hiding in the building," Detroit Police Chief James White said during a news conference following their arrests.