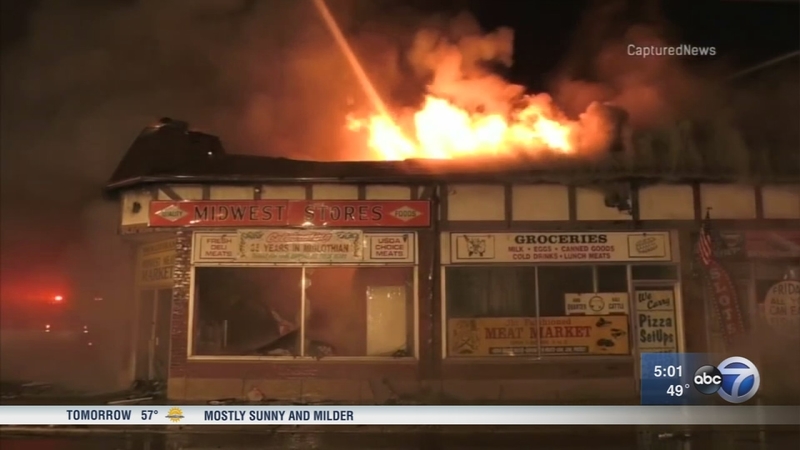 Firefighters said they got the call for help around 11 p.m. When crews got to the scene, the building at 147th Street and Pulaski Avenue was engulfed.

The stubborn blaze took nearly four hours to completely put out. Fire departments from several surrounding communities joined in the effort. Fortunately no one was injured.

"This was our life and our livelihood. We've been here for almost 40 years," said Midwest Meat Market Owner Catherine Fino.

A lifetime of memories up in smoke. This wasn't just a grocery store. It was the place where Catherine and Abe Fino first met and where they raised their three children.

"My mom was going in for a half pound of Swiss cheese. My dad was the one taking care of her. He asked her on a date," said Joe Fino, son of market owner Abe Fino.

Midlothian's Midwest Meat Market has been a staple of this south suburban community for decades. Fire destroyed it, along with two other businesses, including Lisa's Diner and a nail salon. There was also an apartment in the back.

"In the back of the building there are two apartments. Police kicked the door in. Removed them. Got them out safety," said Midlothian Fire Chief Stephen Hotwagner.

The building is a complete loss. For the business owners, their livelihoods have been put in jeopardy, but that is not what any one of them were thinking of Saturday.

"It was everything. I lost my husband a year ago. It was our dream. I was just trying to keep it alive. It's everything to me and my kids," said Lisa's Diner owner Lisa Kenealy.

Friends have created a GoFundMe page for the Kenealy family.

"It's like we didn't have customers. It's like an extended family. We got Christmas cards, birthday cards, holiday gifts. When people had a new baby, they brought their kids in. Everything like that. That's the stuff we're going to miss," said Joe Fino.

The Fino family said they owned the entire building. They're not sure whether they will rebuild.

Robert Huisman found out about the fire at Lisa's Diner as he was coming for breakfast.

"It's where I went to breakfast every day just about or dinner. It's been here as long as I have been here or longer I should say. It means a lot," Huisman said.