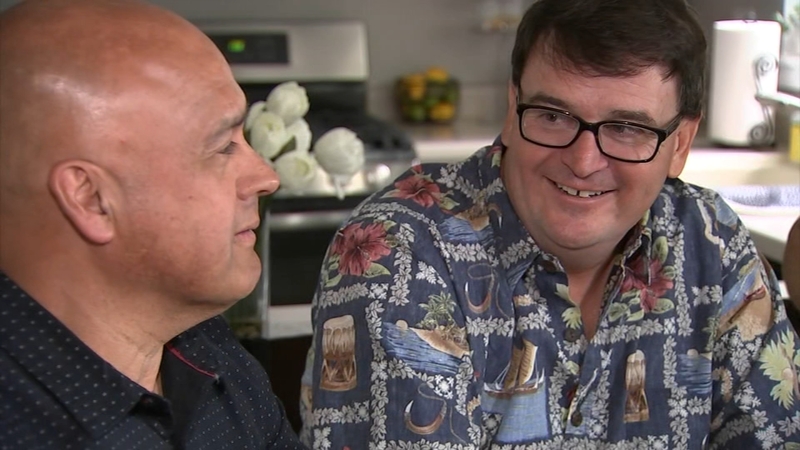 Man meets stranger who saved his life on Metra train

OSWEGO, Ill. (WLS) -- A stranger on a Metra train is being hailed as a hero for taking action and saving the life of a man who was having a heart attack.

Last Tuesday, Bill Hennessy was running to make a train from Chicago to Aurora, a decision that would forever change his life. The train was two minutes delayed, so he was able to catch it and found himself standing on the fourth car where Ruben Rodriguez was sitting. Suddenly, Hennessy became short of breath.

"Everybody starts screaming, just complete chaos," Rodriguez recalled. "Right away there was a gentleman sitting next to me and I said, 'Hey man, let me through.'"

Hennessy had fallen to the ground unconscious and was having a heart attack.

"I know that look much too well because four years earlier almost to the day, my friend and colleague at work died in my hands," Rodriguez said. "I used the AED on him, but was never revived."

Ever since that loss, Rodriguez said he locates the AED in every scenario. He knew exactly where it was on the Metra -- and he was given a second chance at saving someone's life.

"I had a glorious life for 51 years and almost 10 months - my first life," Hennessy said. "I am about a week in to my second life, thank you to this guy."

The two met for the first time in person on Wednesday. It turns out they don't live far from each other so, Rodriguez came to the Hennessy household and saw what his heroic act meant to the family of six.

"I can't thank him enough," Hennessy's wife Belinda said. "I told him every minute, every day, that I spend with my husband from here on out I owe to him. Bill and I have been together for almost 26 years now. We've been together since we were 18."

The Hennessy's said that Rodriguez is forever invited to family events and parties and Bill and Ruben have become good friends.

"He called me and said, 'Hey, can we start carpooling every day?'' Rodriguez said. "And I said, "You know what man, let's just meet on the train."
Report a correction or typo
Related topics:
oswegorescueheart attackmetragood samaritan
Copyright © 2021 WLS-TV. All Rights Reserved.
More Videos
From CNN Newsource affiliates
TOP STORIES