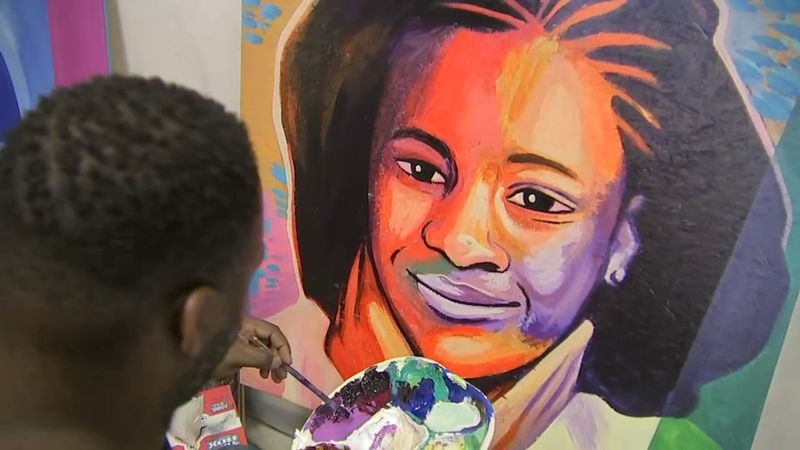 CHICAGO (WLS) -- A South Shore artist has created a series of portraits bringing attention to missing women of color, whose cases are more likely to go unsolved.

Thursday Damon Lamar Reed was working on a portrait of 15-year-old Yasmine Acree, who has been missing since 2008. He created the Still Searching Project, painting portraits of missing women in the Chicago area, after the unsolved murder of his aunt led him to become more aware of cases of missing women.


"I just want to help spread that awareness, get the word out, maybe that will cause certain cases to get opened back up," he said.

A Thursday Congressional hearing addressed the issue nationwide. Congresswoman Robin Kelly (D-IL 02) noted that media coverage of missing women of color "pales in comparison to missing white women" at the hearing she called in the Committee on Oversight and Reform's Subcommittee on Civil Rights and Civil Liberties. She cited data showing 40% of missing women and girls nationwide are people of color.

Among the others who testified was Shawn Wilkinson, father of Akia Eggleson from Baltimore, who said when his pregnant daughter went missing in 2017, neither police nor media got involved, even when she missed her own baby shower.

"Society does not care about us," he told the assembled representatives.


"I'm deeply troubled by the fact that she didn't show up for her baby shower and law enforcement doesn't take it seriously until 30 days later," said Congressman Kweisi Mfume (D-MD 07).

The Chicago area has its own share of families still searching for their loved ones, like the families of Kierra Coles and Sheena Gibbs.

"The more eyes to get on it, the more people that can talk about it and eventually start to create that change," said Reed about his art.