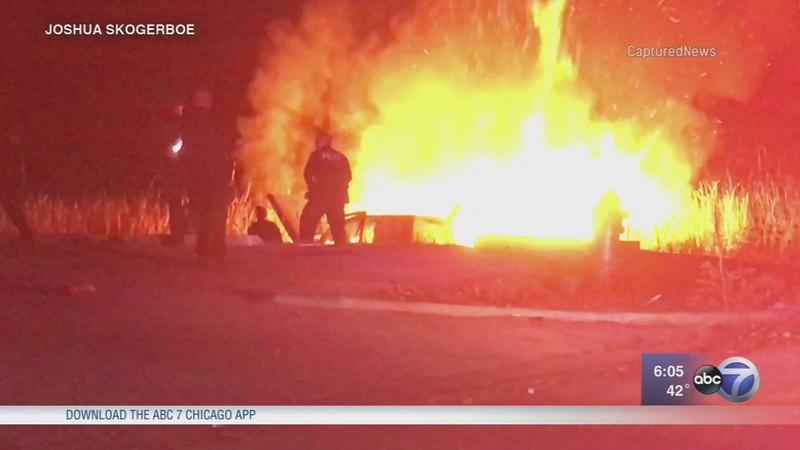 The man, identified as Earnest Sercye, was driving a red pick-up truck when he crashed into an SUV, a car wash stall and then a concrete barrier which caused his vehicle to burst into flames.

Sercye, who remained in critical condition Wednesday night, was charged with driving under the influence of drugs. More charges are expected.

His wild ride started at about 6 p.m. when he rear-ended an SUV at Montgomery and Douglas roads. The SUV belongs to Pastor Joshua Skogerboe, of St. Olaf Lutheran Church, who pulled over intending to talk to Sercye and exchange insurance information.

"He and his passenger looked at me and just kept driving," Skogerboe said.

So Skogerboe, whose son was in the car, jumped back into his Jeep and chased after Sercye.

He didn't pull over, but Skogerboe was able to get in front of him.

A police officer spotted Sercye crashing his truck into a kiosk at the Power Car Wash.

"He was just destroying his truck," Skogerboe said.

Sercye kept his foot on the gas, next running his truck into a concrete barrier and flames soon followed.

Pastor Skogerboe said he hopes Sercye pulls through, noting that he has no regrets about chasing after him.

"All I was thinking was, 'This is injustice that he's leaving and he can't get away with it,'" Skogerboe said. "I know the police force around here is super responsive and I expected them to be there quickly."