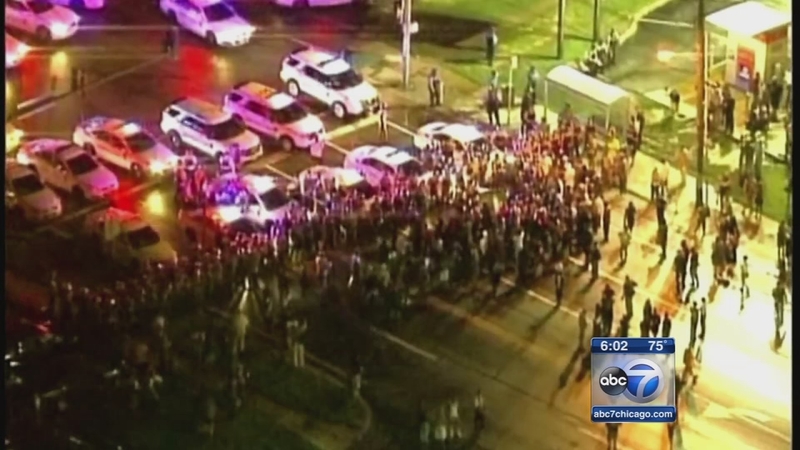 State of emergency declared in Ferguson

FERGUSON, Mo. (WLS) -- A state of emergency is in effect in Ferguson, Mo., Monday after a tense night of gunfire and violence on the first anniversary of Michael Brown's shooting death by a police officer.

The state of emergency means that Ferguson law enforcement is now in the hands of St. Louis County Police and gives the county police chief full power and authority to preserve order, prevent crimes, and protect life and property.

Police and witnesses say a gunfight erupted when two groups of people started firing at each other during the otherwise peaceful protest in memory of Brown.

During the volley of gunshots, 18-year-old Tyrone Harris, Jr., who is black, was wounded by police after they say he opened fire on officers sitting in a police car. He is in a hospital in critical condition.

"He had a stolen, 9mm Sig Sauer, stolen in 2014 from Cape Girardeau, Missouri," said Chief Jon Belmar of the St. Louis County Police.

One witness posted a video on Twitter of what appears to show the teen on the ground with an officer standing over him.

Chief Belmar says several of his officers also were injured

With police still on the scene in Ferguson, a city again on the brink, the police chief says he just hopes tonight will be peaceful.

"My prayer is that we can move forward without the violence that has unfortunately been associated with this, because the stakes are very high here," Chief Belmar said. "I've talked a lot about you cannot do this forever without a tragedy."

Harris is charged with five counts of armed criminal action, four counts of first degree assault on a police officer and a gun charge; 10 felonies in all. Police say they had been following Harris, suspecting him to be armed. Harris' father this afternoon says it's a bunch of lies and that his son's friends said the teenager was unarmed.

At the Fraternal Order of Police National Conference on Monday, officers were once again on the defensive.