Construction worker at Museum of Science and Industry pinned under forklift, critically injured 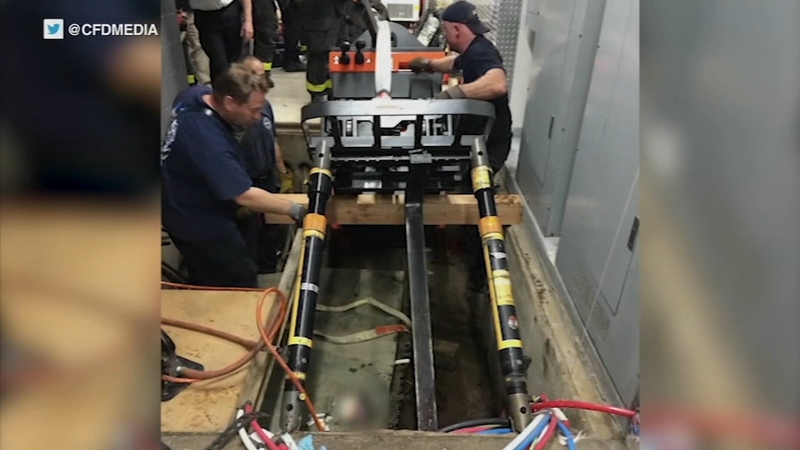 CHICAGO (WLS) -- A construction worker was critically injured after being pinned underneath a forklift inside the Museum of Science and Industry Monday night.

Authorities responded to the museum in the 5700-block of South Cornell Drive at about 10:29 p.m., police said.

A 51-year-old man was struck by the forklift and pinned underneath the 2,000 lbs. forklift in a six foot hole, injuring the man's left arm, authorities said. Workers were completing the removal of a 1,000 pound electrical vault underneath the first floor of the museum.

Witnesses said it was as the 2,000 pound forklift attempted to lift the vault and then a floor access panel gave way, causing the worker to be thrown into the six-foot-deep vault and the forklift to fall in on top of him.

The man was trapped for about 45 minutes before being freed by the Chicago Fire Department. He was transported to University of Chicago Medical Center in critical but stable condition, CFD said.

"His arm was actually pinned to the ground by one of the forks on the forklift. It went through his arm and pinned him to the ground," said CFD Special Operations Chief Tim Walsh.

The accident comes as the Museum of Science and Industry undertakes a year-long renovation project to modernize the historic building.

In a statement, a spokesperson with the museum writes, "We take the safety and well-being of everyone onsite at MSI very seriously and are working with the contractor to thoroughly review the situation. Our thoughts are with him and his loved ones."
Report a correction or typo
Related topics:
chicagohyde parkmuseum of science and industryworker hurtconstruction accidentchicago fire department
Copyright © 2022 WLS-TV. All Rights Reserved.
TOP STORIES
American Airlines flight turned around over maskless passenger
Man shot by U of C police officer called 911, said he was armed: court
Illinois reports 23,246 new COVID cases, 198 deaths
Reporter hit by car on live television, but continued reporting
Meat Loaf, 'Bat Out of Hell' rock superstar, dies at 74
How Chicago police use ShotSpotter technology to help fight crime
Rittenhouse asks for gun seized during arrest to be returned
Show More
Pedestrian killed in Edison Park hit-and-run: police
Chicago Weather: Sunny, cold Friday
McConnell: Black people vote at similar rates to 'Americans'
Cook Co. judge's 'sexist' comments caught on livestream
Quigley warns Russia-Ukraine tensions could quickly get 'very grave'
More TOP STORIES News