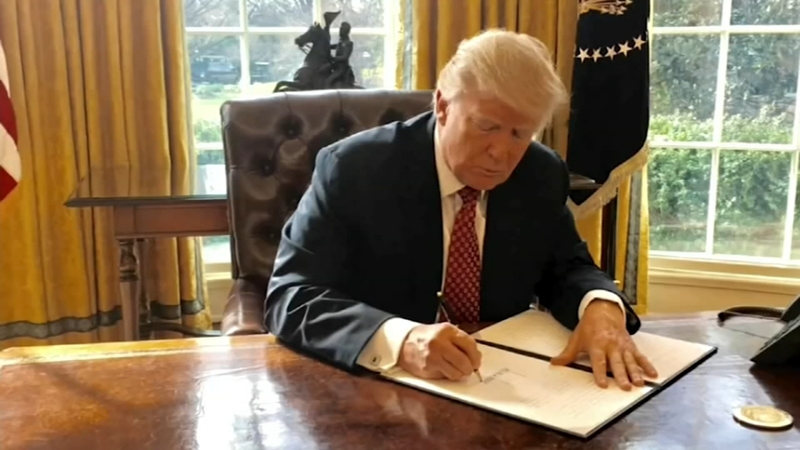 CHICAGO (WLS) -- Jihad Al-Nabi, a Syrian refugee who works as a pastry chef at a Turkish restaurant on Chicago's Northwest Side, is hopeful that his family will soon be able to visit him in the U.S.

"A lot of people from the Syrian refugee community are asking, does this mean that our family members can now apply for visas if they need to," said Suzanne Akhras Sahloul, the executive director of the Syrian Community Network.

The ban sparked demonstrations at O'Hare International Airport and airports across the country when it went into effect four years ago.

"It signified that, 'Hey Muslims, we don't really want you here in our country.' Not even, really. 'We don't want you in this country, flat out,'" said Sufyan Sohel, the deputy director and counsel for CAIR-Chicago.

Many in the Muslim community say they want to make sure this never happens again to any group of people.

"There were people not able to see their ailing or sick families who have then passed away. You can never right that wrong. People who lost the ability to start their lives on a certain timetable. Time that will never come back again," said Salman Azam, an attorney who is a Downtown Islamic Center executive board member.
Report a correction or typo
Related topics:
politicschicagoloopexecutive ordertravelmuslimsjoe bidenu.s. & worldpresident donald trumprace and culture
Copyright © 2022 WLS-TV. All Rights Reserved.
TOP STORIES
9 shot, 2 fatally, on Near North Side
13-year-old carjacking suspect critically injured in police shooting
City Council to take up ordinance on curfew changes
United cancels couple's flight, charges $4K more for same seats
Val, Ryan talk prom season, athlete battling Parkinson's disease
Chicago Weather: Hot with showers, storms Friday
Wild shootout at 7-Eleven store caught on video
Show More
Marine veteran seriously injured in Irving Park hit-and-run
PGA Championship picks, predictions with ESPN Chicago's Randy Merkin
Teen shot and killed in vehicle on Far South Side ID'd by ME
Celebrate National Streaming Day with Hulu for $1/month for 3 months
Our America: Because I Am | Full episode
More TOP STORIES News