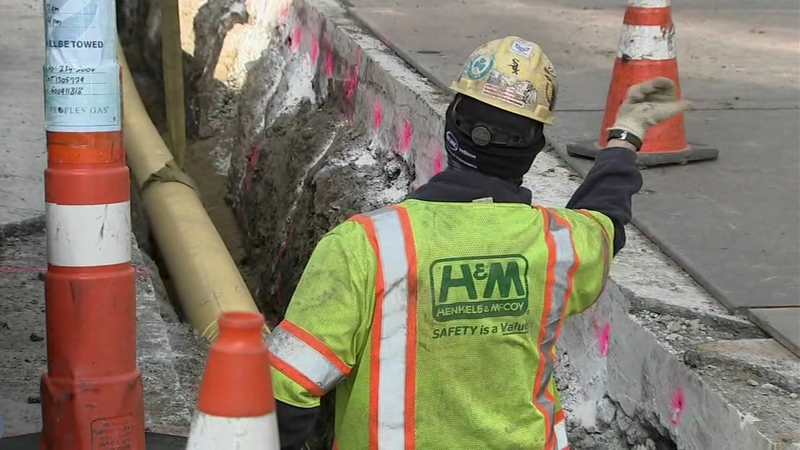 New law would get rid of Illinois gas bill surcharge

CHICAGO (WLS) -- Natural gas prices have been skyrocketing nationwide due to inflation, but local lawmakers say surcharges from utilities are also adding to the cost.

Proposed Illinois legislation could eliminate a surcharge which may currently be on your natural gas bill. It could also slow down future gas rate hikes.

"If they can get rid of that surcharge that would help tremendously to my family," said Donna Carpenter.

This month the Englewood resident's surcharge was more than $16. It helps pay for a Peoples Gas project to improve its infrastructure and replace old pipes.

"We have to be in our home cold. What is that? Which days are we going to cook for our families? That will come as we can't afford these games," she said.

Surcharges for all gas utilities were allowed by the General Assembly in 2013 to help improve the infrastructure and replace dangerous pipes. Now, lawmakers and consumer advocacy groups say proposed legislation would get rid of it and force natural gas companies to find other ways to pay for future work and improvements.

"Nobody here are saying they don't want good infrastructure, reliable infrastructure, but they also want to make sure that what is being given to utilities is being used wisely and do they really need it at that time," said State Senator Cristina Castor, (D-22nd District).

"This legislation will not shut down infrastructure spending as the utilities will, it will simply transition into traditional regulatory oversight. This bill will slow the breakneck pace that rate hikes people in all corners of this state have been experiencing," said Bryan McDaniel, Director of Governmental Affairs for CUB.

"Some have seen their gas bill triple in the last couple of months, and many are unfortunately behind on their bill," Jeffrey Scott, Associate State Director of AARP Illinois added.
Peoples said says no matter what happens, its improvements to the system can't stop.

"Our position, and I don't think anybody disagrees, is that the work to modernize Chicago's natural gas delivery infrastructure, which dates all the way back to the 1800s, must be done. The only question is what is the best manner in order to pay for the necessary investment," said David Schwartz, Media Relations for Peoples Gas.

Nicor said its current surcharge is minimal, showing one example of 14 cents a month. The company added the surcharge has helped them invest over $2.5 billion in infrastructure and that improvements have allowed them to deliver gas safely.

To reduce your heating bills turn down your thermostat by a few degrees, make sure your air filters are changed and keep you heating system is properly maintained. Also, seal drafts around your home.