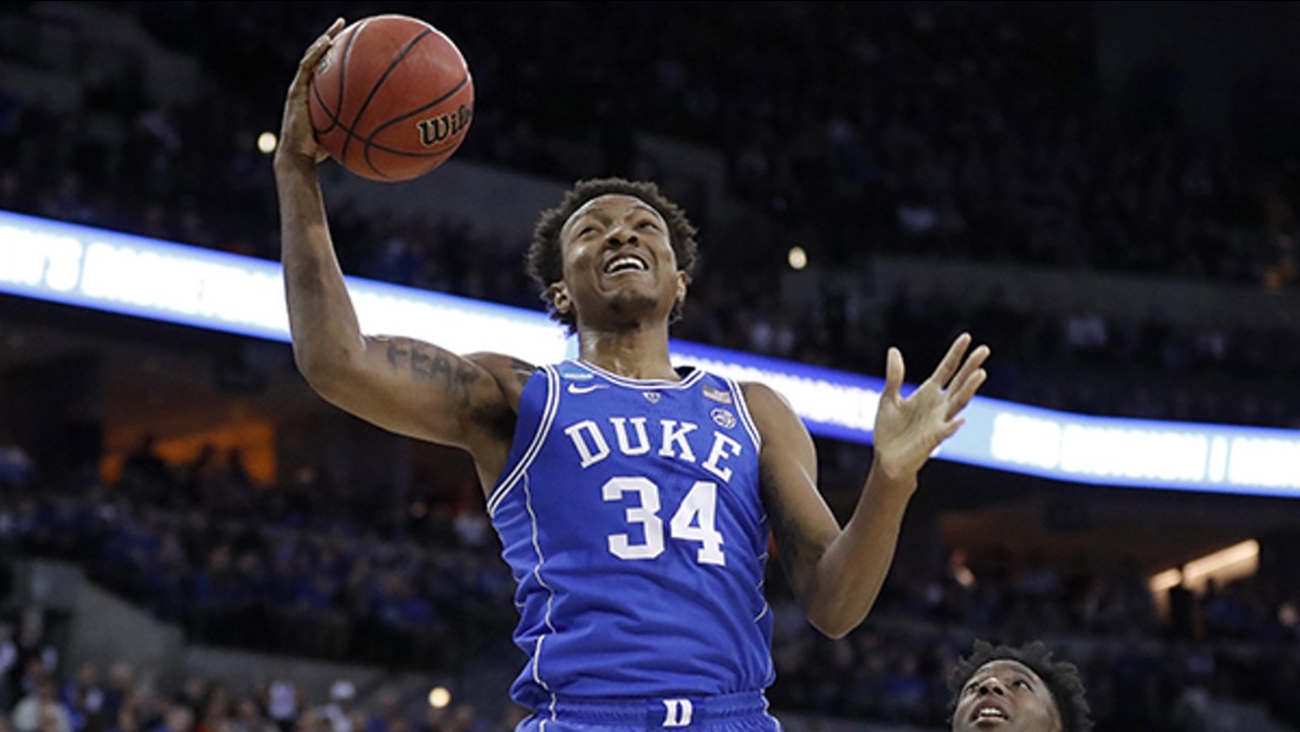 Duke's Wendell Carter Jr (34) heads to the basket during the first half of a regional final game in the NCAA men's college basketball tournament Sunday, March 25, 2018. (AP Photo/Charlie Neibergall)

NEW YORK -- The Chicago Bulls drafted Duke's Wendell Carter Jr. with the No. 7 overall pick on Thursday night, giving them another versatile big man to go with Lauri Markkanen.

The 6-foot-10, 259-pound Carter Jr. was the second Blue Devils big man taken after Marvin Bagley III went to Sacramento at No. 2. With his ability to hit from the outside and score down low, he averaged 13.5 points and 9.1 rebounds as a freshman last season while helping the Blue Devils advance to the Elite Eight.

The Bulls are banking on Carter to form a potent tandem with Markkanen and help them climb in the Eastern Conference coming off a 27-55 season. Chicago also owned the No. 22 pick.

The Bulls went all in on rebuilding on draft night last June after years of treading water in the wake of the Derrick Rose era. They dealt star Jimmy Butler to Minnesota for Markkanen, Zach LaVine and Kris Dunn and made their intentions clear.

Chicago went on to finish with its worst record since the 2003-04 season and miss the playoffs for the second time in three years. Though the Bulls didn't land a top three pick in the lottery, management believes the team is in a better position.

The 7-foot Markkanen emerged as the team's best player and one of the league's most productive rookies with his ability to hit from the perimeter and go inside. He averaged 15.2 points and 7.5 rebounds after being drafted seventh overall, and the Bulls sure would take that from Carter.

Dunn made a big jump in his second NBA season, though LaVine showed some rust coming back from a torn ACL in his left knee. The two-time slam dunk champion missed the first 42 games and sat out the final 14 because of tendinitis in the knee. He is set to become a restricted free agent and could be in for some interesting negotiations, with the Bulls and other teams.
Report a correction or typo
Related topics:
sportschicago bullsduke universitynba draft
Copyright © 2022 by The Associated Press. All Rights Reserved.
TOP STORIES
Deadly pileup crash on I-294 blocks SB traffic in Glenview
Man fatally stabbed on train between Clinton, LaSalle Blue Line stops
Alderman Michael Scott resigns to join Cinespace
Imani, Monty and Rose's 2021 chick, spotted at Montrose Beach
Heard rests case at libel trial without calling Depp
Minnesota mom charged with killing son; body found in trunk
NFL QB Dwayne Haskins legally drunk when he was hit, autopsy shows
Show More
Evanston senior denied graduation walk for Native regalia on cap
Planned Parenthood of Illinois offering abortion pills through mail
Man loses both legs after Michigan Ave. hit-and-run
Horse 'close to death' after 8-mile Dan Ryan ride now recovering
11-month-old 'Mayor of the NICU' leaves suburban hospital for 1st time
More TOP STORIES News