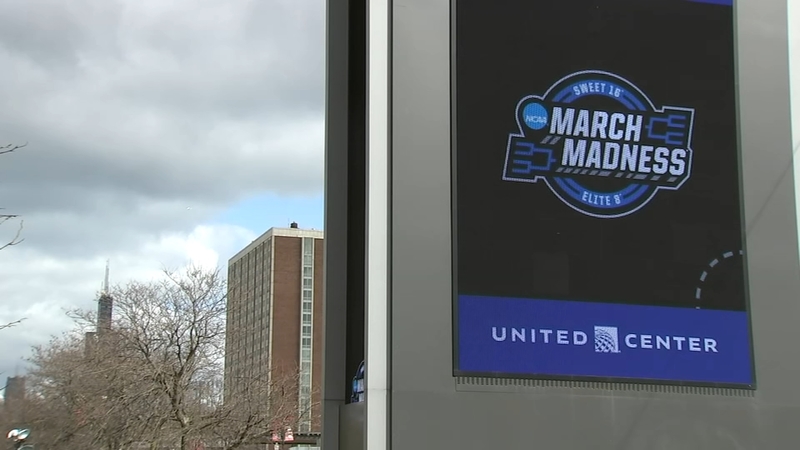 CHICAGO (WLS) -- NCAA basketball is back in Chicago, and with it could come a big economic boom with a sold out crowd at the United Center.

Big crowds in the city are stoked to support their Sweet 16 basketball teams. Iowa State fans setting a standard at the Aon Ballroom pep rally at Navy Pier.

"To have this team in the Sweet 16, and by the time they tip it off tonight they'll be one of 10 teams that still has a chance to win the national championship," said John Walters, voice of the Iowa State Cyclones, "I'm telling you, nobody, even the names, ever saw that one coming."

But outside, even on a gloomy day, you can feel the excitement. March Madness is back after six years here in Chicago. It's something that means even more to Miami band member Greg Kafkes.

"I am actually from Chicago originally," Kafkes said, "so I grew up here and I'm a huge Bulls fan and Blackhawks fan so getting a chance to play in the United Center is so exciting."

He and so many others staying the weekend are helping hotel capacity that's been badly hurting.

"When you see people coming into O'Hare and Midway and they're wearing jerseys, and they're showing their pride for their school and they're here and they're excited to be here because they get to back that school so it's a great reason to bring people to Chicago," said Kara Bachman, executive director of Chicago Sports Commission.

Bachman said the last time the city hosted NCAA tournament games, the city added tens of thousands of hotel nights. And now, United Center is hosting a sold out crowd.

"Now they have a reason to come back and we get to remind them why Chicago is such an amazing city," she said, "sports being a huge part of that."

But whether you're supporting Iowa State, Miami, Providence or Kansas, some things all fans had in common was faith in their team and love for our city.

Providence fan Pat Alcarez said he was "very, very happy to be here."

"There's so many things to see in Chicago, it's such a great city," Kansas fan Todd Boeve said.

"Chicago's a great place to visit so we're really looking forward to the weekend," Iowa State fan Clint Grochowski said. "We think it's gonna be really special for the Cyclones."