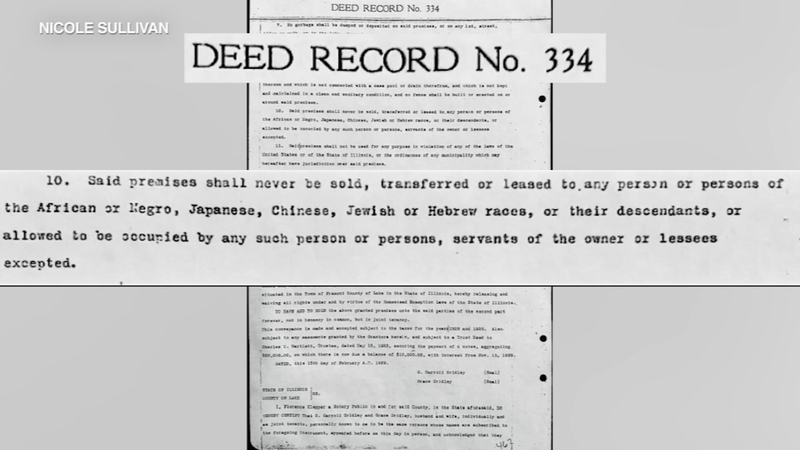 LAKE COUNTY, Ill. (WLS) -- When Nicole Sullivan moved into her neighborhood in unincorporated Mundelein about ten years ago she discovered a restrictive covenant in her property deed.

It was written decades ago, aimed at barring people of African, Japanese, Chinese and Jewish descent from moving in certain areas.

"It was pretty shocking to find out that way," Sullivan said. "And also just troubling to know how many people have bought a house in our neighborhood, and learned this way after the fact."

Racial restrictive covenants, which were common between the 1920s and late 1940s, were contractual agreements by a group of property owners or developers to keep certain groups out. They were outlawed after a 1948 Supreme Court decision but the practice continued until the Fair Housing Act in 1968.

Chloe Thurston, an assistant professor of political science at Northwestern University, authored a book on housing discrimination in the 20th century titled "At the Boundaries of Homeownership: Credit, Discrimination, and the American State."

"If you have a house that was built before 1950, there's a pretty good chance that there's a restrictive covenant in the deed, particularly if that was a neighborhood that was historically predominantly white," she explained.

This week Sullivan became the first person in Lake County, likely in Illinois, to file a restrictive covenant modification. She submitted her request to the Recorder of Deeds Office in the county.

Sullivan is credited with pushing for legislation in Springfield to allow homeowners to remove racist language from their property deeds. That law took effect on January 1.

"I wish it would have been changed decades ago. But now that we have the tools to change it, I think everyone should change that," she said.

Thurston agrees removing the language from deeds is the right move.

Scholars, Thurston included, continue to research the scope of racial covenants and its impact on homeownership and neighborhood demographics today.

Sullivan wants to make her community a more welcoming place and be a positive example for her children.

"Even if you are a regular person and you see something that you think is wrong, I think people need to realize you do have a voice and you do have power," she said.