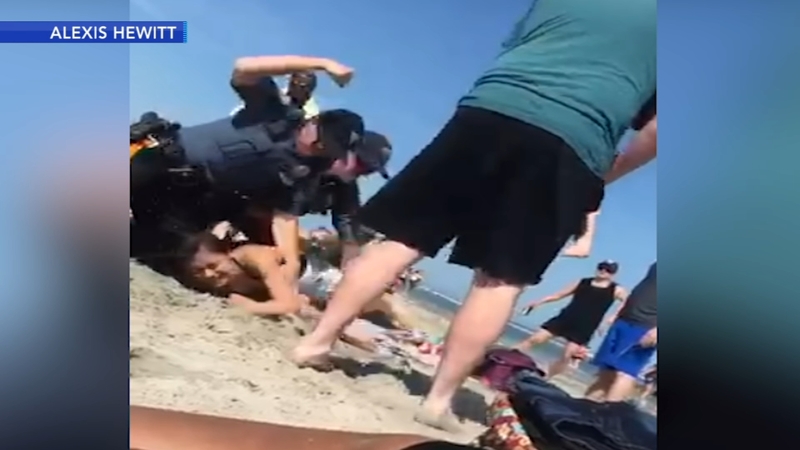 WILDWOOD, N.J. -- With more than 4 million views, a video captured on Saturday shows 20-year-old Emily Weinman being punched and tackled by Wildwood police officers after being approached for underage drinking on the beach.

Alexis Hewitt, 19, of Williamstown, New Jersey, was laying down nearby and started recording when she heard the commotion.

"When she fell that's what caught my eye because everyone was yelling," said Hewitt.

"I clearly think it something that we need to work on, but again, you have to see the entire video we're going to be releasing the officers' body camera footage within the coming days," he said.

The woman in the video, Emily Weinman, took to Facebook to explain she was caught with unopened alcohol on the beach and a Breathalyzer test came back negative.

"I asked them, don't they have something better to do as cops than to stop people for underage drinking on the beach. The cop said, 'I was gonna let you go, but now I'll write you up' and he asked my name," Weinman said.

She refused to give her name. Police say that's when she spit on the officers. The young mother now is facing charges.

But witnesses say training and restraint could have easily prevented this from happening.

"I just think when you are in a higher power you should understand the circumstances and what you should and shouldn't be doing," said Hewitt.

Both officers involved have been placed on administrative duty.

Police have asked witnesses to come forward. They've been provided more accounts, and video from different angles that are in the hands of internal investigators and Cape May County Prosecutors office tasked with determining if this was an excessive use of force.

Weinman, 20, of Philadelphia, was arrested and charged with disorderly conduct, minor in possession of alcohol, two counts of aggravated assault on police and obstruction after police said she was drinking on the beach, subsequently spit at a police officer and resisted arrest.

"So, I decide to go on the beach with my daughter, her father and friend. I had alcohol, it's Memorial Day weekend and 90 percent of people are underage drinking on the beach, without a doubt," said Weinman in a post on Facebook that has since been removed. "Two cops approach me on their four wheelers and ask me and my friend how old we are, we gave them our ages. Then, we got breathalized, and it came back negative. I told them I wasn't drinking and the alcohol was clearly closed/sealed, which the cops seen."

Weinman then writes that she walked away from the officer, attempting to make a phone call.

"I asked them don't they have something better to do as cops than to stop people for underage drinking on the beach, saying to that there's so much more serious stuff going on... the cop said, "I was gonna let you go but now I'll write you up" and he asked my name. I did not do anything wrong and anything could've been written down on that paper so I wouldn't give it to him. At that point I was told if I don't give it to him he's going to arrest me."
EMBED More News Videos

An Internal Affairs Investigation was immediately initiated into this matter and the involved officers have been reassigned to administrative duty pending the outcome of a full and thorough investigation.