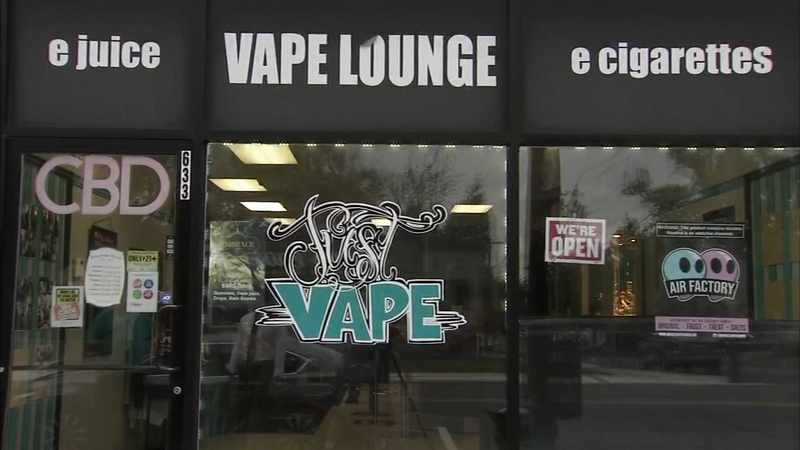 TRENTON, New Jersey -- "I can lose my house. I have four kids. I can lose everything," said Mya McDade who owns a vape shop in Haddon Township, New Jersey.

But her vape shop, along with many others might have to close because several New Jersey lawmakers say they're making legislation to ban vaping.

The new law is being crafted by Democratic Senate President Stephen Sweeney.

He wants to ban all vaping products, especially flavored vaping liquids, over the course of the next two or three years. He's calling the industry a children's health crisis.

SEE ALSO: What you need to know about the vaping crisis

"The usage, underage usage is through the roof," Sweeney said.

On Monday, Action News asked the Sweeney why not treat vaping products like the tobacco industry?

The ill side effects of smoking are well documented and people still do it.

"Smoking takes a long period of time to cause the damage that it does to your lungs. With vaping the next day you can wind up in the hospital," Sweeney says.

This year the CDC confirms 380 cases of lung disease and six deaths to vaping.

"We try to stop kids from underage drinking. We try to stop them from smoking. We had an industry that basically walked into schools and convinced kids to vape," said Sweeney.

Right now, the state does tax liquid nicotine, as it does cigarette and tobacco sales.

But Sweeney says the state could do without this kind of revenue.

"Flavors are coming in from China and other countries with no quality testing, no anything," he said.

However, McDade argues something much different.

She blames the spike in lung disease on e-cigarettes sold on the black market or online to kids, not the product from credible labs.

"Why all of a sudden is it all kids? It's all kids. I've been vaping for five years," she says.

However, Sweeney says, "You know they say it's about the black market, the street corner but people are getting them in the store too."

But McDade's rebuttal to that is the industry just simply needs regulation.

"Ban online sales. How about ban it in bodegas," said McDade.

She also argues the way vaping products are marketed should change, just like tobacco had to.

McDade adds it's a shame she might lose her livelihood over an issue that could be fixed.