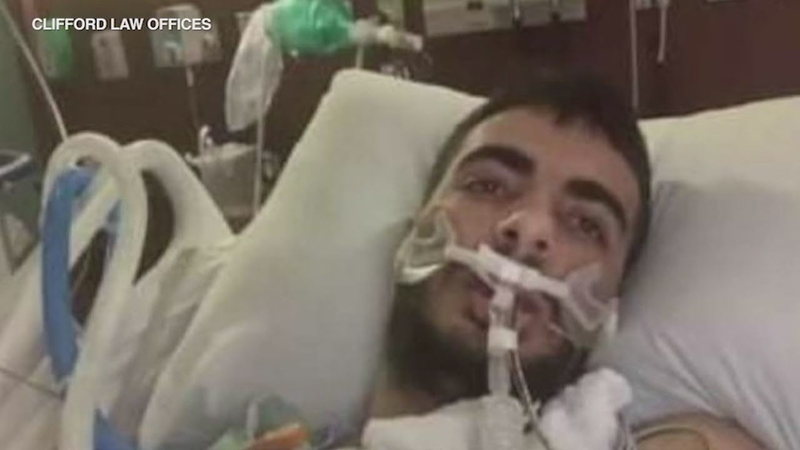 NEW LENOX, Ill. (WLS) -- The mother of 24-year-old Qusai Alkafaween said he came to the U.S. from Jordan to attend college, but now he's severely impaired, and lawyers are suing New Lenox police and Silver Cross Hospital, blaming them for a string of events that ended with the him suffering brain damage.

Alkafaween, of Worth, was "negligently discharged" from Silver Cross Hospital on December 5, 2020, according to a lawsuit filed by Clifford Law Offices.

Alkafaween's lawyers said he planned to attend the University of Illinois Chicago, but he never got the chance after a string of events unfolded on that winter day. Now, he has a traumatic brain injury.

"With all respect to him, it's as if his mother is babysitting him, as if he's a young child the age of 7 or 8 years old," said the plaintiff's attorney, Jack Casciato.

Attorneys for Alkafaween have filed a lawsuit against Silver Cross Hospital in New Lenox and a doctor at the hospital, saying he shouldn't have been discharged Dec. 5 because he has a history of schizophrenia.

"The hospital should have admitted him to their psychiatric unit, where he could have had appropriate mental health professionals examine him, be with him, and supervise him," Casciato said.

A Silver Cross spokeswoman says the hospital "does not comment on pending litigation."

Wednesday, Alkafaween's attorneys released part of the police body camera video they received. Lawyers said in one of the videos inside the hospital listeners can hear officers talking about Alkafaween's release.

Officer: Because we're not taking him all the way to Chicago.

Officer: We're not taking him all the way to Orland Park.

Nurse: Of course not.

Officer: Hopefully he doesn't ping-pong and come back here to you guys.

The lawsuit alleges New Lenox officers dropped him off in a parking lot near Wolf Road and Route 6 in Orland Park, miles from his car. Alkafaween didn't know where he was. The law firm added subtitles to the video they released.

Qusai: You want to help me with that?

Officer: This is as far as I can take you right now.

Qusai: Ok, this gotta help me, help me.

Officer: This is Orland Park, so if you start walking north here, there's gonna be some businesses.

Once he started walking, lawyers say he was hit by a vehicle on Wolf Road, causing a traumatic brain injury.

His mother got an emergency visa to the U.S. to care for him. The attorneys read her statement Wednesday.

"He had so much hope and promise. Instead everything is now shut off for him. Any hope for him of doing great things has ended with the inhumane treatment at the hands of those who just didn't care what happened to him," said Ikhlas Alraqad, Alkafaween's mother.