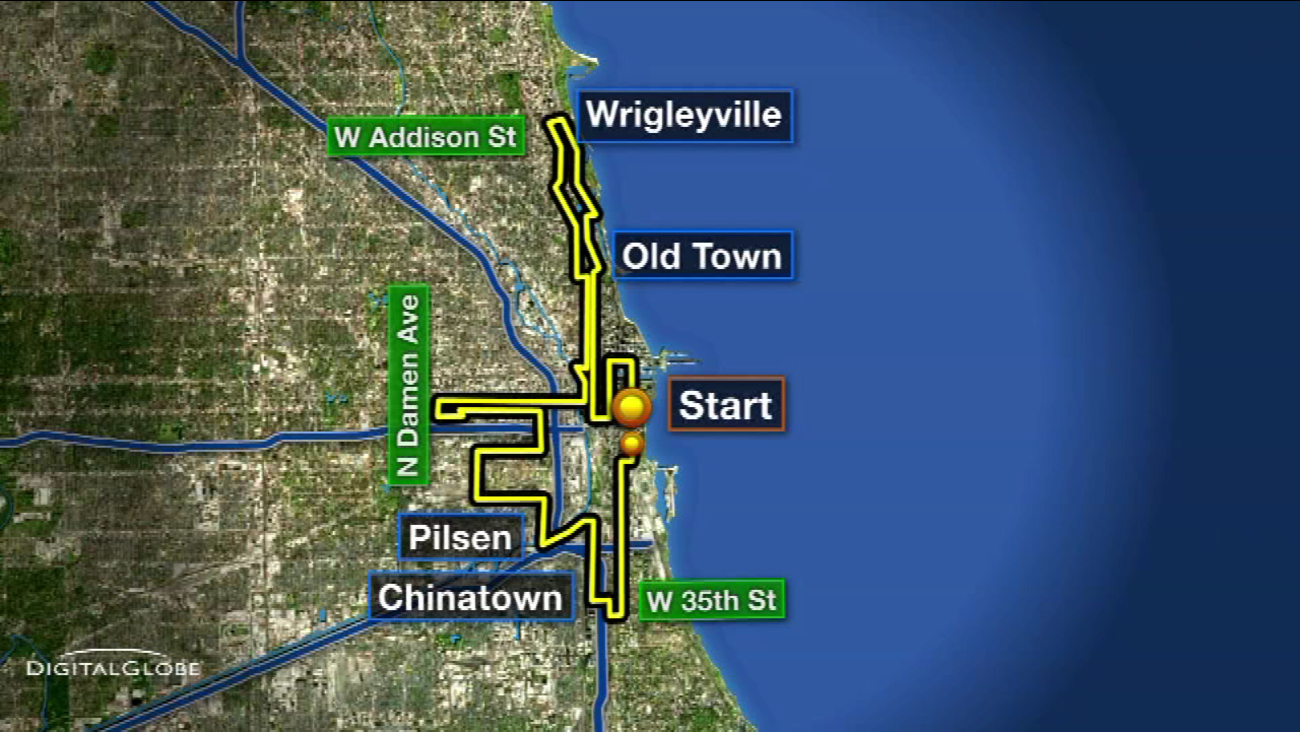 CHICAGO (WLS) -- Street closures and changes to CTA and Metra schedules are in place as more than 40,000 runners are expected to take part in the Bank of America Chicago Marathon on Sunday.

The race on Sunday, October 11 begins in two waves - one wave begins at 7:30 a.m. (CST), followed by the next group at 8:00 a.m. The race starts and finishes in Grant Park, with the route extending as far north to Addison Street, with the farthest west point at Damen Avenue and southern point at 35th Street.

Street closures along the route will begin at approximately 7:00 a.m. on Sunday and are anticipated to be reopened by 4:30 p.m. or when it is deemed safe to do so.

Beginning early Sunday morning, parking restrictions will be in effect along the course. For public safety and traffic flow, the towing of vehicles along the route and other posted "No Parking Zones" will be strictly enforced. Motorists are encouraged to read signage before parking and call 3-1-1 to locate a towed vehicle.

Metra will operate extra early morning inbound and early afternoon outbound trains on five of its rail lines to accommodate participants and spectators attending the marathon on Sunday.

Extra service will be available on the BNSF, Metra Electric, Milwaukee North and Union Pacific North and Northwest lines. This service will operate in addition to regularly scheduled Sunday service.

As always, public transportation is encouraged if heading to the marathon or other destinations in the impacted areas. For more information on CTA services and reroutes, visit www.transitchicago.com or call 836-7000/1-888-YOUR-CTA.

Brown Line: Longer trains will operate beginning with the start of service until 4 p.m. More frequent service also will be provided with trains operating every 10 minutes from 6 a.m. until
3 p.m.

Purple Line: Service will begin earlier than normal, with the first train departing at 5:30 a.m. from Linden to Howard where customers can transfer to the Red Line trains for service to downtown.

On Friday and Saturday, the CTA will operate increased service on the #3 King Drive route for the 2015 Chicago Marathon Health & Fitness Expo at the McCormick Place Convention Center. Extra service will begin each day at approximately 7:40 a.m. until approximately 10 p.m. Friday night and 8 p.m. Saturday night.

For the 2015 Chicago Marathon, the CTA will operate the Yellow Line Shuttle earlier, with the first trip departing Dempster-Skokie at 5:40 am. The free shuttle buses serve all Yellow Line rail stations (Dempster-Skokie, Oakton-Skokie and Howard).

The affected routes are: