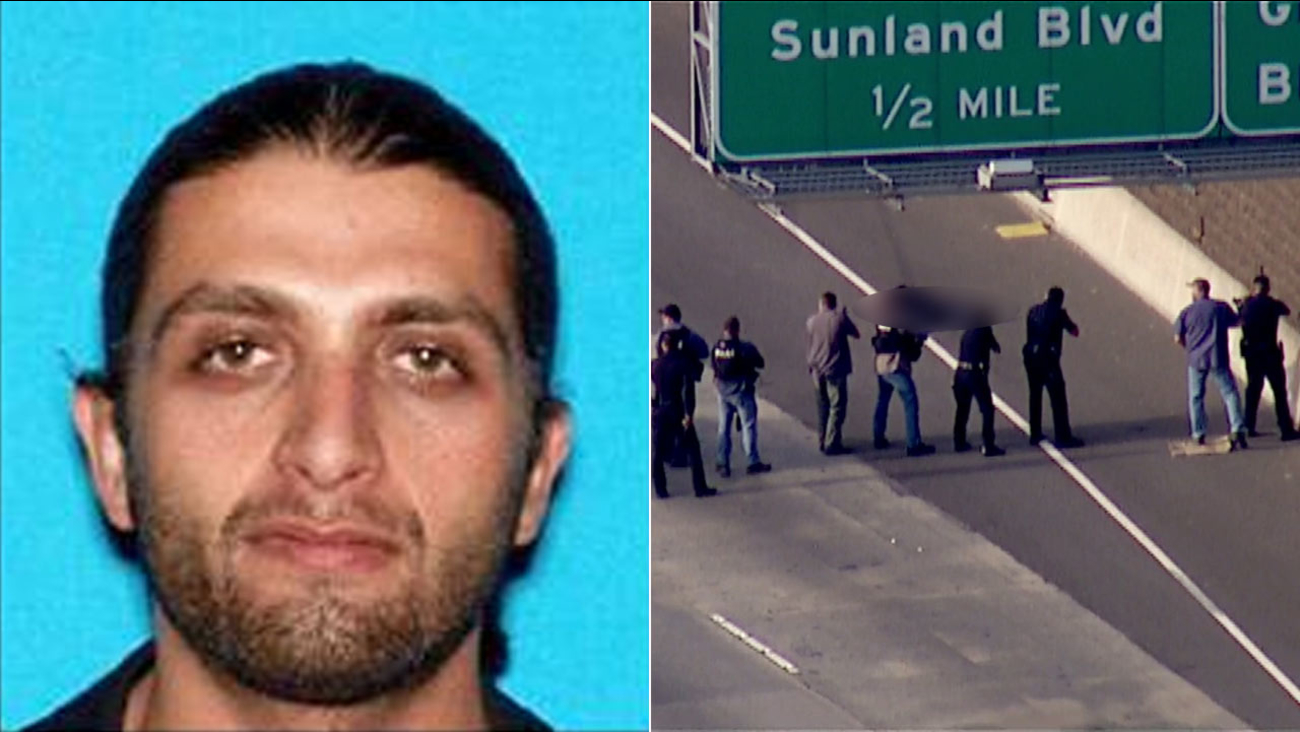 (Left) Artyom Gasparyan is seen in a photo released by LAPD. (Right) The suspect is wounded following a police chase on the 5 North on Monday, Jan. 4, 2016.

SUN VALLEY, LOS ANGELES -- A possible murder suspect was shot and injured after a police chase that ended in a crash on the northbound 5 Freeway in Sun Valley on Monday.

Los Angeles Chief of Police Charlie Beck confirmed that the suspect is Artyom Gasparyan, who was wanted for a series of crimes including robbery, carjacking, attempted murder and murder over the past 26 days across Los Angeles County.

(Left) Artyom Gasparyan is seen in a photo released by LAPD. (Right) The suspect is wounded following a police chase on the 5 North on Monday, Jan. 4, 2016.

The 32-year-old was injured and transported to a hospital in critical condition following an officer-involved shooting at the end of a chase near Glenoaks Boulevard, which shut down the 5 Freeway.

Beck said the chase began after an undercover officer spotted Gasparyan trying to repair his vehicle at a car shop. Authorities said he changed the license plate several times on that car, which he had been using to flee from police.

Around 3 p.m., after the suspect realized police had spotted him, police said they began chasing the suspect going southbound on the northbound lanes of the freeway when he crashed with a car that had a family inside. Authorities said a mother and one or two children were hurt with non-life threatening injuries.

Authorities said police opened fire when the suspect approached officers. Police could not confirm whether Gasparyan fired at officers but said they believe he was armed with the same weapon that's been used throughout the crime spree.

No officers were hurt in the shooting.

Beck said that with the dangerous suspect in custody, the public can now sleep better at night.

"He's a very dangerous individual. I've had well over 100 detectives and several hundred line officers assigned specifically to capture him over the past week," he said.

The series of crimes began on Dec. 6 in the northeast area of Los Angeles, with the most recent incident being a carjacking in the city of Carson on Friday.

According to a press release issued by the LAPD, Gasparyan has been identified as committing a number of the crimes with Daniel Ramirez, who was taken into custody in Long Beach after a standoff with police in which he shot two people, stabbed another and then shot himself at a home in the 3300 block of Daisy Avenue.