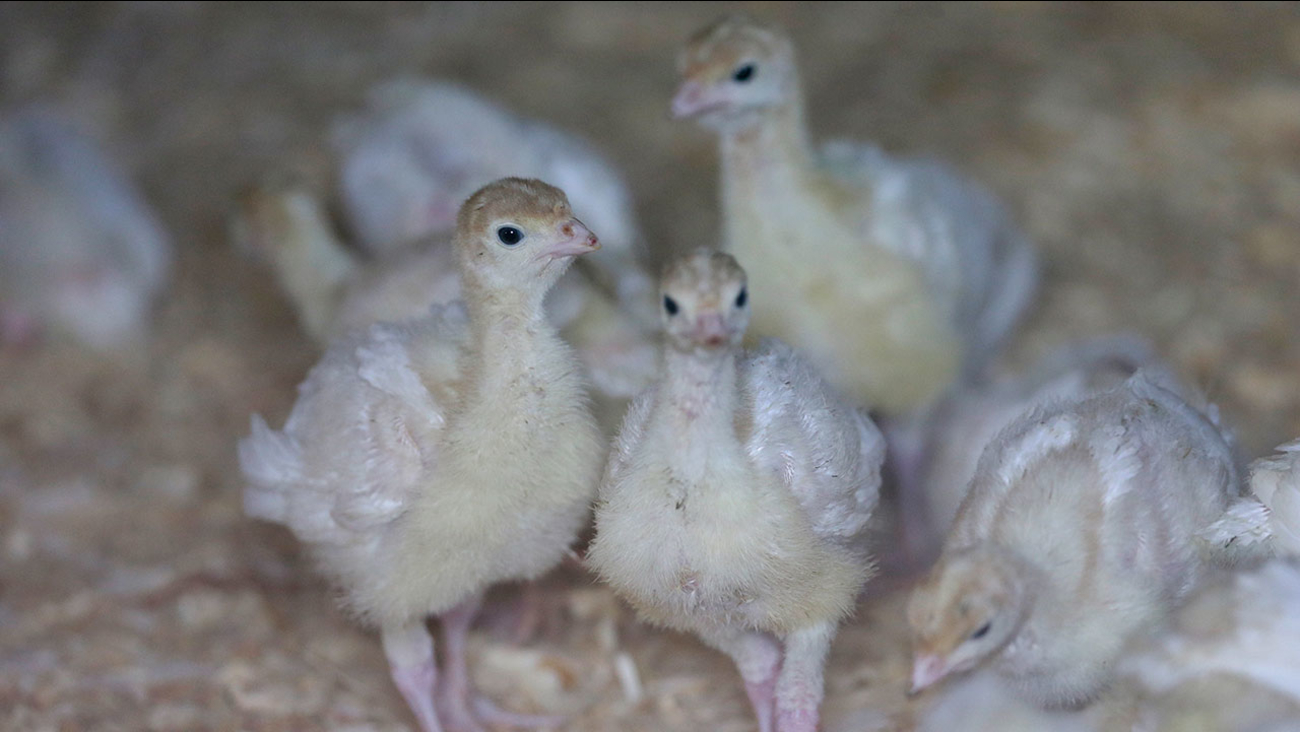 Turkeys stand in a barn on the Moline family turkey farm in Manson, Iowa. (File/Charlie Neibergall)

HUNTINGBURG, Ind. -- Birds from nine more commercial turkey farms in Indiana have tested positive for bird flu, and officials were trying Saturday to determine the strain of the highly contagious virus.

The nine farms are located in Dubois County, Indiana, about 70 miles from Louisville, Kentucky, the Indiana State Board of Animal Health said in a statement.

Authorities on Friday confirmed another commercial flock in Dubois County was infected with the H7N8 strain, which is different than the H5N2 virus that led to the deaths of about 48 million turkeys and chickens last summer.

All of the new infections are located within a control area set up around the first farm, the statement said. The control area, which is under quarantine, has been expanded to four other Indiana counties, the board said.

Denise Derrer, spokeswoman for the Indiana board, said officials are still trying to determine how many birds are affected on the nine farms covered by the announcement Saturday. Officials had begun euthanizing birds at most of the new sites, the board said. All 60,000 turkeys on the first farm have been euthanized.

Research has shown that wild birds' northern migration introduced the H5N2 virus, which began to accelerate from farm to farm in the spring. But it isn't clear whether the mild winter weather played a role in the current outbreak, state and federal officials said. The highly pathogenic H7N8 virus has not yet been found in wild birds, suggesting that the virus could have developed in wild birds that spent the winter in southern Indiana, USDA spokeswoman Andrea McNally said Friday.

"We may know more once the remaining work on virus sequencing is completed, likely sometime next week," she said.

There's also no indication why H7N8 surfaced during winter months, but officials have said bird flu - any strain of it - could resurface anytime.

Indiana's poultry industry brings in $2.5 billion a year, Derrer said, adding that the state leads the country in duck production, is No. 3 in egg production and fourth in turkeys. Dubois County, about 70 miles west of Louisville, Kentucky, is Indiana's top poultry grower with 1.4 million turkeys, Derrer said Saturday.

The H7N8 strain is highly contagious for birds; the USDA said no human infections with the viral strain have been detected.

Gov. Mike Pence met Saturday with state and local officials at an incident command center in Jasper. Pence emphasized in a statement after the briefing that the poultry industry is vital to Indiana and authorities are "bringing all necessary resources to deal with this situation."