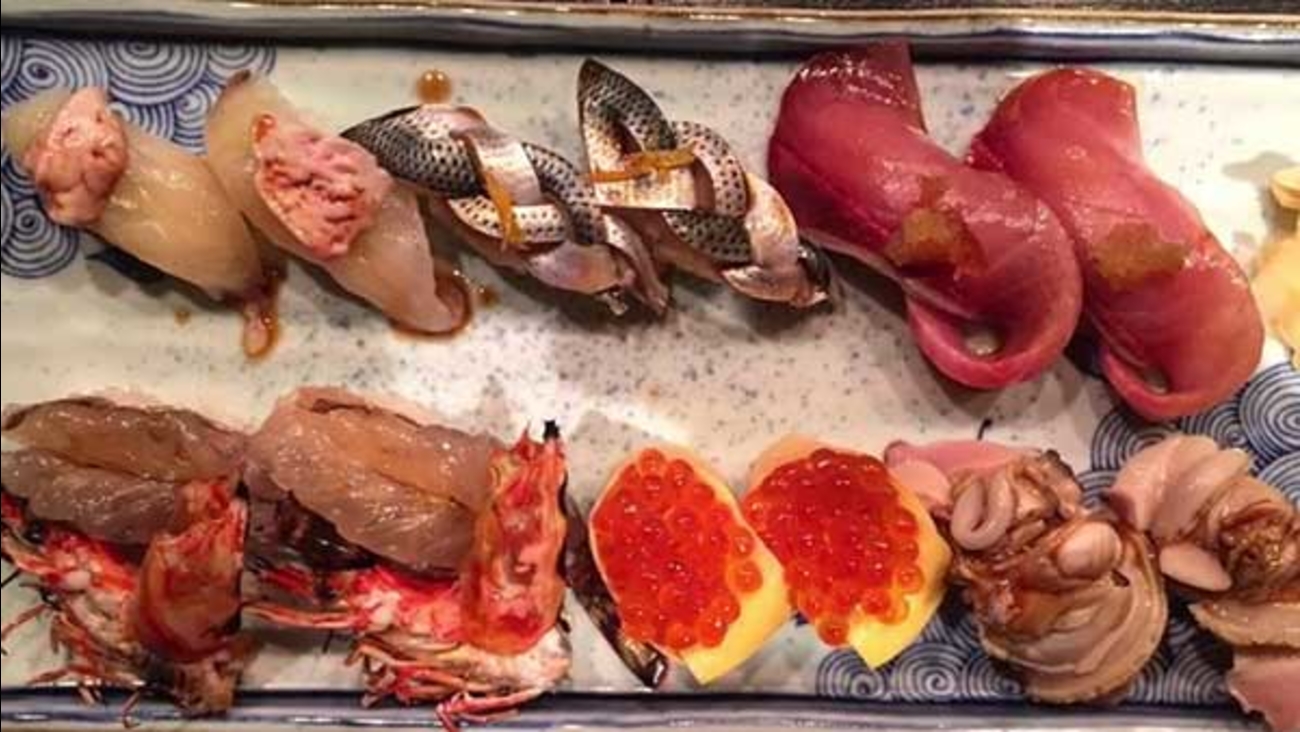 ABC7's Steve Dolinsky is sharing a series of videos he shot and edited himself while exploring Japan's most delicious cuisine.

CHICAGO (WLS) -- After eating his way through Japan, ABC7's Steve Dolinsky is sharing a series of videos he shot and edited himself while exploring the country's most delicious cuisine.

One of my favorite things to do in a new city is to explore its local markets. It could be a beloved supermarket, where they still make food to-order, or a bustling market, where chaos and noise and aroma dominate. On my most recent trip to Japan, I spent a few days in Osaka, which I learned is a city obsessed with eating. Nowhere is this more evident than at the busy Kuromon Market, home to dozens of vendors, each shouting a lively hello and thank you (arigato gozaimasu!) to passersby. The great thing about this market is the sheer number of places to sit and eat. It was the first time I've ever had bluefin tuna for breakfast, and I can't wait to have it again one day.

TAKOYAKI ON DOTONBORI STREET IN OSAKA


Takoyaki is not one of those dishes that appears on very many Japanese restaurant menus in the U.S. Typically made from a dashi-infused, flour-based batter, it is poured into tiny, golfball-sized half moon skillets, each one embedded with a small piece of cooked tako, or octopus. The dish was created in Osaka, a city obsessed with eating, and all along busy Dotonbori Street, you'll see vendor after vendor hawking and calling out to potential customers, that they make the best version. Watching some of these cooks work is fascinating. They move with such rapid speed and efficiency. Now, if only we could get this Osaka-based snack to become more mainstream here in the U.S., we'd have some serious competition for the neighborhood falafel guy, at least with respect to spherical snacking.


You'll find some of the best eating in Tokyo in the basement, of all places. Whether it's a depachika in a department store or a train station, the Japanese never have too far to go to find something incredibly delicious (and beautiful) to eat. On my recent trip to Tokyo, I stopped in the lower level of the Tokyo station, the same one you'll arrive at if you take the train in from Narita Airport. There, you'll find "Ramen Street" - an alleyway with several excellent ramen shops catering to travelers and train company employees with limited time to eat. Naturally, the quality of the broth and the noodles is as good as anywhere in the city. In this case, I had tsukemen ramen, which means the noodles arrive alongside the bowl of broth, allowing you to dip them in as you wish. It also prevents them from getting soggy in the hot broth. Next to the bluefin I had at the market in Osaka, this was one of my favorite breakfasts in Japan. Oishii!

If Japan has been on your bucket list, now would be the time to plan a trip, because come November, the glorious, historic and well-worn Inner Market at Tsukiji will be moving about a mile away to a brand new facility, scrubbed of any faded glory. You certainly won't get to see the tuna auctions anymore, at least not from a few yards away; they'll most likely take place behind glass. The world's largest fish market is a sight to behold, and the next time I go (hopefully before November) I'll plan on spending a full half-day there. The Inner Market is where you see the real action, but the Outer Market is where the ancillary businesses are - restaurants, retail shops, knife makers, etc. Those aren't going anywhere, and my guess is they will still attract tourists. But for sheer seafood thrills, it's the Inner Market where you want to stroll after 9 a.m., because it's still the only place in the world where you can see the bounty of the world's oceans all in one place. I spent some time in the Outer Market this visit, getting a sushi-making class and buying up as much kombu (seaweed) and katsuobushi (dried and smoked skipjack tuna) as I could, determined to make my own dashi.

You think you've tried every kind of pancake out there? Sure, you've had the sweet ones with ricotta, topped with fruit, or maybe the savory ones embedded with sweet potatoes or some other nonsense, but I'm guessing you probably haven't seen (or tasted) a lot of okonomiyaki. This savory cabbage pancake is the star of Osaka (along with takoyaki - see yesterday's post) due in part to the range of potential flavors. "Okonomi" means "whatever you like" so diners typically go for things like pork belly, wagyu beef or seafood; I'm fine with shrimp and scallions, frankly. The thin batter always contains dashi - the building block of Japanese cuisine - made from kombu (dried seaweed) and katsuobushi (thinly-shaved, smoked and dried skipjack tuna). Although in Osaka, the dashi tends to be more kombu-based, which means more gentle, and less intense than in Tokyo. The must-have toppings are okonomiyaki sauce (think sweetened A1 or worcestershire) with a healthy drizzle of Kewpie mayo (the version at Fukutaro is cut with white wine and mustard) and a vigorous shake of finely-minced nori (dried seaweed). Personally, I don't think these pancakes need all of that sauce; there's plenty of umami going on without it, and you sacrifice a crispy exterior, but that's just my opinion. In Chicago, Ramen-san offers a limited, so-so okonomiyaki menu on Saturdays, but the best version I've had locally was the one from Tsukiji Fish Market on West Grand Ave (where they also have takoyaki).
Related topics:
food & drinktravelfoodjapanhungry hound
Copyright © 2021 WLS-TV. All Rights Reserved.
TOP STORIES
5 states, Puerto Rico added to Chicago Travel Advisory
CDC issues new eviction ban for most of US through Oct. 3
Officer dead after burst of violence outside Pentagon
Skateboarder Terry Kennedy charged in Wheaton man's death
IL reports 2,682 COVID cases, 8 deaths
7 of 10 Chicago friends get breakthrough COVID after vacation
Chicago Weather: Sunny, pleasant Tuesday
Show More
Medical equipment donated to Chicago family with quadriplegic son
Man who escaped Elgin police during transport in St. Charles captured
Biden chides Republican governors who resist vaccine rules
Schaumburg resident wins $100K in Illinois COVID vaccine lottery
Some Chicago restaurants require masks as COVID cases increase
More TOP STORIES News