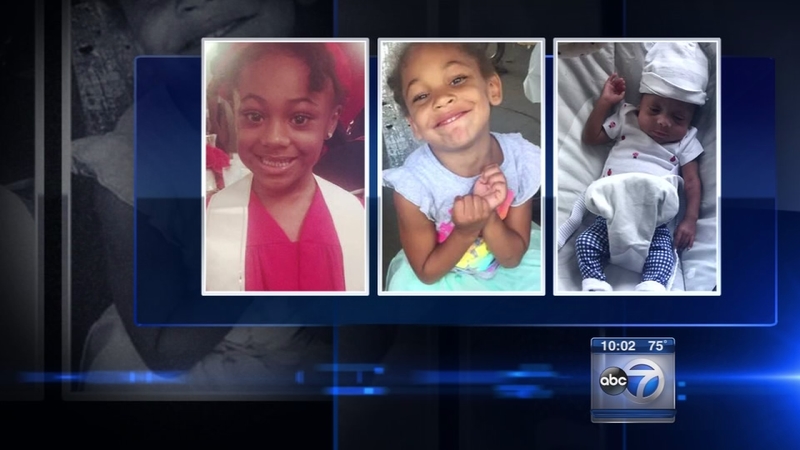 CHICAGO (WLS) -- Police said charges are pending against one man in custody after three children and a man died early Tuesday in a "suspicious" apartment fire on Chicago's southeast side.

Chicago Fire Department Deputy Commissioner Arriel Gray Jr. said two children, an infant and a man were killed in the extra-alarm fire that broke out in the 8100-block of South Essex Avenue just before 1:35 a.m. Tuesday.

Firefighters arrived on the scene to find heavy flames on the second and third floors of the three-story courtyard apartment building, Gray said. Gray said about 200 CFD personnel responded to the scene.

"We tried to also establish a search, a primary search on the upper floors, but we could not get to them due to the fact that the interior stairwells were burned out," said Deputy Fire Commissioner Ariel Gray.

As firefighters went into defensive mode, neighbors said residents had to jump to safety.

"It was so scary because you're running around and there's nothing you can get. It's just the nick of the time. You've got to hurry up and get out. You don't know what's happening. The fire was upstairs and downstairs when I came in the hallway. I didn't actually know where it was coming from," said Lanita Smith, who lives in the building.

Melanie's relatives said her father, 36-year-old Michael Watson, grabbed her and jumped out of a third-floor window. He was transported to Advocate Christ Medical Center, where he is being treated in a the burn unit for critical burns.

His daughter did not survive. Melanie was rushed to Comer Children's Hospital, where she was pronounced dead at 2:40 a.m., the medical examiner's office said.

"When the guy jumped out of the window, I didn't even know at that time he had a baby in his arms. I just heard a thud, when I looked over he was over there yelling and screaming in pain," said resident Byron West.

"I went over there to try to help him with the baby, and the lady, one of the nurses standing on the street, came and gave the baby CPR, but right away I knew the baby was almost lifeless. And it hurt me in my heart to see that," said neighbor Clavorn Turner.

Family members of the three sisters gathered at the apartment and released balloons in their honor. Their mother, Kyra Smith, is distraught.

"I just hope they're in heaven. I just loved them so much, and they loved me," Smith said through her tears.

The flames were extinguished just before 4:40 a.m. When firefighters conducted their final search, Gray said they found a man and two young girls dead on the third floor.

"They was with their daddy. Their daddy is in the hospital, burned severely," said Charmaine Staples, a family member.

The children were found in the same apartment, but were not together, Gray said. The man was found in an adjacent apartment. Authorities have not released his identity.

"They're no kin to me, but they're human beings and I really feel bad about this. I feel that they should deserve, they really deserve a chance at life and now they're gone," said neighbor Donnie Staples.

LaToya Terry said she believes she knows exactly who started the fire: a man that lives on the block and is a known user of drugs and alcohol. She said he came to her place around 1 a.m. Tuesday, asking for $10. When she didn't give him any money, Terry said he retaliated by starting the fire.

"He said I owed him $10. I slammed my door in his face and told him I don't owe him anything. He began to kick and punch at my door," Terry said.

The exact cause of the fire remains under investigation.

Tuesday afternoon some of the firefighters who initially responded to the blaze returned to give away smoke detectors.

The fire that ripped through a Chicago apartment building and killed four people also left others, surivvors, injured. They are angry and in shock.

Dozens of people were displaced by the fire. The American Red Cross set up a temporary shelter nearby to help.

Those who survived now have painful stories to tell. One man, who did not want to give his name, is grateful he and his girlfriend were able to escape the blaze though he didn't make it out unharmed.

"I had to jump out a window. My girlfriend had to run through the fire," he said.

He suffered a broken leg, a shattered wrist and burns to his face.

"It was madness. I mean, I can't even describe. It just looked like the sun was in the building," he said.

He and other victims being helped by the Red Cross said they feel lucky to be alive, and that the heat and smoke were unbearable.

"I was one of the last people that go out. The power was out, it was dark, and it was just a certain amount of smoke," said Jerome Northern.

Evan Alexander said the alarm from his carbon monoxide detector woke up him up and gave him time to get out. Now he wants to see change.

"It's sad that the kids lost their lives and things of that nature, but hopefully better building management will come from this, people will know how to escape fires with their children," Alexander said.

Two firefighters also suffered minor injuries during the response - a shoulder injury and an injury to the left hand.

The building, owned by a company in Florida, failed its most recent inspection. Building officials said the apartment complex was last inspected on Nov. 5, 2015.

The ABC7 I-Team learned building code citations were issued because inspectors couldn't access most of the apartments to verify there were smoke detectors inside.