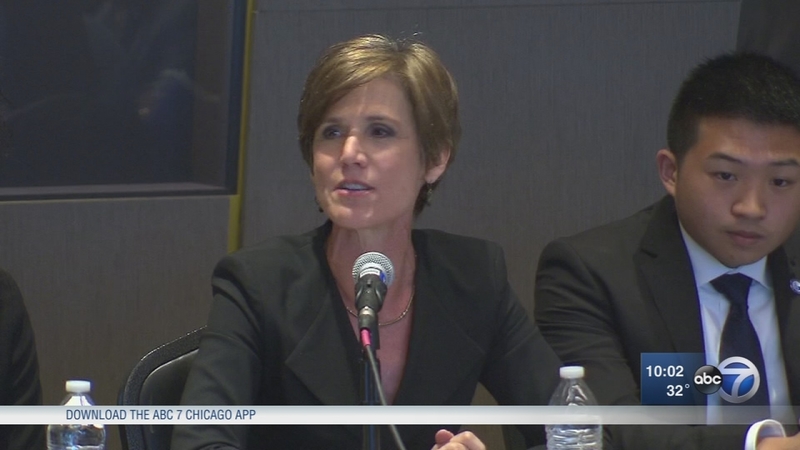 .@POTUS has named Dana Boente, US Attorney for the Eastern District of VA as Acting Attorney General. Sally Yates has been relieved.

Trump appointed Danda Boente to serve as Acting Attorney General in Yates' place. He was sworng in at 9 p.m., the White House said.

Boente served as U.S. Attorney for the Eastern District of Virginia until this appointment. He was nominated for that position by President Obama in 2015.

"I am honored to serve President Trump in this role until Senator Sessions is confirmed. I will defend and enforce the laws of our country to ensure that our people and our nation are protected," Boente said.

"My responsibility is to ensure that the position of the Department of justice is not only legally defensible, but is informed by our best view of what the law is after consideration of all the facts. IN addition, I am responsible for ensuring that the positions we take in court remain consistent with this institution's solemn obligation to always seek justice and stand for what is right. At present, I am not convinced that the defense of the Executive Order is consistent with these responsibilities nor am I convinced that the Executive Order is lawful.

"Consequently, for as long as I am the Acting Attorney General, the Department of Justice will not present arguments in defense of the Executive Order, unless and until I become convinced that it is appropriate to do so," Yates wrote in her letter.

Protesters gathered for the third night in a row at O'Hare International Airport to demonstrate against the executive order. Thousands protested the executive order over the weekend, and were joined by politicians and community leaders, including Mayor Rahm Emanuel.
Custom officials confirmed early Monday that no one was detained at O'Hare or any other airport. Over the weekend, lawyers said 18 people were detained and released at O'Hare.

Hassan Ghassemi was understandably nervous as he waited for his wife and 11-month-year-old son, who he hadn't seen in almost a month, to arrive. They were released from customs after several hours.

"It's very tired, I'm very tired. After 24 hours traveling with baby, it takes around six hours that I was outside, just a few questions. Yeah," said Azid Ghassemi.

Even though she has a green card, because she was traveling from Iran customs officers spent a few hours questioning her before she and her son Daniel were released into the U.S. For Hassan it was frustrating.

A group of lawyers is camped out at O'Hare International Airport to help anyone, including refugees, traveling from the countries named in Trump's ban successfuly enter the U.S.

Several hundred lawyers have set up camp at tables underneath the escalator in Terminal 5. There they monitor flights and passengers who may have legal trouble entering the country in light of the executive order. Other lawyers wait at the exits offering free legal service to anyone arriving in America who needs it.

The attorneys are all volunteering their time.

"I think I just wanted to take some action to feel like I was making the world better and not just being complacent and ranting on my Facebook," said attorney Christine Remissong.

Remissong was at O'Hare over the weekend as one of the thousands of protesters. Many attorneys are at the airport courtesy of their companies, who are donating the cause.

"There's a lot of people's political beliefs, but I think basically everyone just wants to this to be well-thought-out and for the laws to be respected," said Kevin Fitzgerald, an attorney who took time off of work to offer his services at the airport.

The lawyers have plenty of support from the city, which has given them this space in the airport to work. They have also received tons of donations, including food and drink. Ald. Deb Mell (33rd Ward), who represents the Albany Park neighborhood, brought food on behalf of her diverse constituency.

"I'm hearing it from my neighborhood, that we want refugees here, they pose no threat," she said.

If you are traveling to O'Hare and are worried about being detained due to ban, please reach out to us! #NoBanNoWall

"The response is sort of the thing that keeps us going, to see all of these communities, not just Muslims, as a matter of fact, a lot of non-Muslims who are just good-hearted human beings, Americans who really love this country and believe in its promise and are living it out," said Ahmed Rehab, the executive director of the Council on American-Islamic Relations.

CAIR announced Monday the filing of a federal lawsuit on behalf individuals challenging the executive order signed by President Trump.

The lawsuit said Trump's executive order, "implements an impermissible religious gerrymander that divides foreign nationals, even those lawfully present inside the United States, into favored and disfavored groups based on their faith."

An Iranian permanent resident of the U.S., who used the name John Doe to protect his identity, also filed a lawsuit against the president for violation of the U.S. Constitution Monday in the Northern District of Illinois in Chicago. Doe's attorneys said the plaintiff is currently in Iran to care for his sick mother and is due to return in a few days, as his first grandchild is due in February.

A spokesman for Barack Obama said the former president "fundamentally disagrees" with discrimination that targets people based on their religion.

The statement alluded to, but did not specifically mention, Trump's travel ban.
Obama spokesman Kevin Lewis said Obama was "heartened" by the amount of engagement seen across the country.

He praised citizens who exercised their constitutional rights to assemble and "have their voices heard by their elected officials." He said that's exactly what he expected to see when "American values are at stake."

Obama has not weighed in on a political issue since leaving office on Jan. 20. He has said he plans to give Trump room to govern but would speak out if Trump violates basic U.S. values.

As a candidate, Trump called for a temporary ban on all Muslim immigration to the U.S. He later shifted his focus to putting in place "extreme vetting" procedures to screen people coming to the U.S. from countries with terrorism ties.

President Donald Trump on Monday denied his immigration order was to blame for the chaos at the nation's airports over the weekend, instead pointing to computer glitches, protesters and even the "tears of Senator Schumer."

Early Monday, he took to Twitter to defend the move, saying that only 109 out of 325,000 people "were detained and held for questioning." Trump also said swift action was important, noting that there are a "lot of bad 'dudes' out there."

At least three top national security officials - Defense Secretary Jim Mattis, Homeland Security Secretary John Kelly and Rex Tillerson, who is awaiting confirmation to lead the State Department - have told associates they were not aware of details of the directive until around the time Trump signed it. Leading intelligence officials were also left largely in the dark, according to U.S. officials.

Tennessee Sen. Bob Corker, the top Republican on the Senate Foreign Relations committee, said that despite White House assurances that congressional leaders were consulted, he learned about the order in the media.

Democratic New York Sen. Schumer choked up over the weekend while talking about the repercussions from the ban, but that brought scorn from Trump.

Trump said the order had been "approved" by Justice Department lawyers. However, the department has said the Office of Legal Counsel review was limited to whether the order was properly drafted, but did not address broader policy questions.

Other parts of Trump's administration also voiced dissent Monday. A large group of American diplomats circulated a memo voicing their opposition to the order, which temporarily halted the entire U.S. refugee program and banned all entries from seven Muslim-majority nations for 90 days. White House spokesman Sean Spicer challenged those opposed to the measure to resign.

"They should either get with the program or they can go," Spicer said.

The blowback underscored Trump's tenuous relationship with his own national security advisers, many of whom he met for the first time during the transition.

Mattis, who stood next to Trump during Friday's signing ceremony, is said to be particularly incensed. A senior U.S. official said Mattis, along with Joint Chiefs Chairman Joseph Dunford, was aware of the general concept of Trump's order but not the details. Tillerson has told the president's political advisers that he was baffled over not being consulted on the substance of the order.

U.S. officials and others with knowledge of the Cabinet's thinking insisted on anonymity in order to disclose the officials' private views.

Despite his public defense of the policy, the president has privately acknowledged flaws in the rollout, according to a person with knowledge of his thinking. But he's also blamed the media - his frequent target - for what he believes are reports exaggerating the dissent and the number of people actually affected.

After a chaotic weekend during which some U.S. legal permanent residents were detained at airports, some agencies were moving swiftly to try to clean up after the White House.

Homeland Security, the agency tasked with implementing much of the refugee ban, clarified that customs and border agents should allow legal residents to enter the country. The Pentagon was trying to exempt Iraqis who worked alongside the U.S. and coalition forces from the 90-day ban on entry from the predominantly Muslim countries.

"There are a number of people in Iraq who have worked for us in a partnership role, whether fighting alongside us or working as translators, often doing so at great peril to themselves," said Navy Capt. Jeff Davis, a Pentagon spokesman.

On Capitol Hill, lawmakers in Trump's party sought to distance themselves from the wide-ranging order.

While Spicer said "appropriate committees and leadership offices" on Capitol Hill were consulted, GOP lawmakers said their offices had no hand in drafting the order and no briefings from the White House on how it would work.

"I think they know that it could have been done in a better way," Corker said of the White House.

Illinois universities are speaking out against President Donald Trump's sweeping travel ban that has left some students and professors stranded abroad.

The University of Illinois System put out a statement Monday saying its three campuses are "greatly concerned" about the ban and "strongly recommend that students and scholars who might be affected defer travel outside the U.S." School officials say they're working with those affected and offering resources.

Northwestern University President Morton Schapiro said Monday that the Evanston school "will refuse to provide information to the federal government regarding the immigration status of members of our community." The school's police also won't detain individuals based on immigration status.

University of Chicago President Robert Zimmer sent a letter Monday to Trump saying the "strongest possible terms" that it's important for the U.S. to continue to welcome immigrants.

Some Northwestern University medical students and professors laid down their lab coats Monday at Lurie Children's Hospital in a show of support for people affected by the possible repeal of the Affordable Care Act.

Organizers called it "white coats for coverage" and said it's a public reminder that a repeal by Republicans and the Trump administration could leave millions without healthcare insurance. 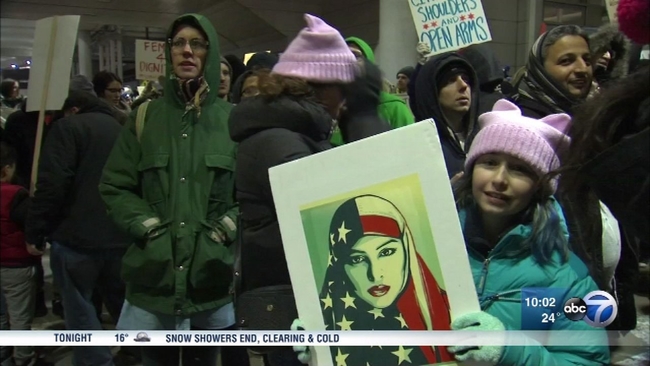