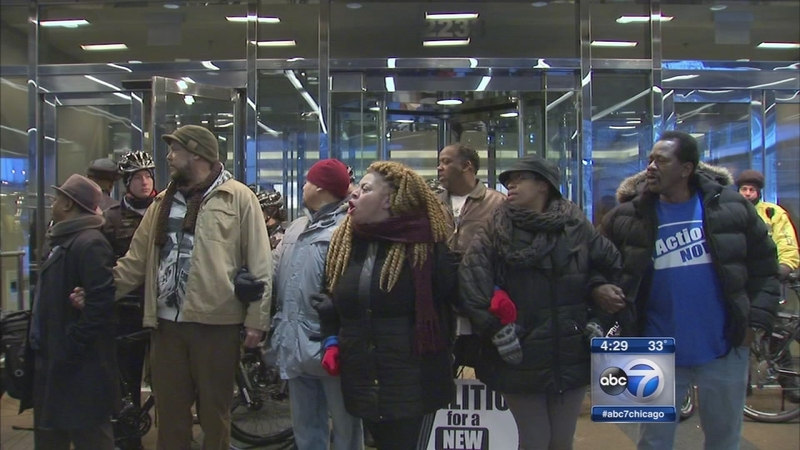 Surely this was not what the late Mayor Harold Washington envisioned when he hosted the first MLK breakfast in 1985. The event was a target for protest groups calling for the resignation of Chicago's current Mayor Rahm Emanuel.

Shouting "shame on you, shame on you," demonstrators locked arms and taunted invited guests as they entered the hotel. At least one group of women needed a police escort.

About a dozen intruders pushed their way inside past security to board the escalator to the second floor lobby. Chaos followed as protesters trying to enter the breakfast alongside invited guests were threatened with arrest.

"Mayor Emanuel caters to the elite class. He will only invite people who support what he does which is closing 54 schools, police misconduct, suppressing evidence, covering up murders," said Rev. Gregory Livingston, Coalition for a New Chicago.

The advertised guest speaker, author Isabela Wilkerson who boycotters asked not to speak, did not appear. The crowded ballroom included many seniors, some who say they were invited within the past 24 hours.

"I did mine yesterday. Got your invitation yesterday? Yeah," said Richard Lackey, a breakfast guest.

"This was not about me. It's about Dr. King, his life and his life's work," said Mayor Rahm Emanuel.

The mayor - whose speech was not interrupted - said the event rededicated the city to Dr. King's vision for social and economic justice.

He would not answer ABC7's question about the keynote speaker's no-show and did not stick around for questions about the boycotters or various protest groups.

Despite the pushing and shoving outside as well as inside the hotel, there were no arrests reported.

Some of the protesters outside the MLK breakfast also protested outside the Chicago Board of Trade Friday morning.

These demonstrators, led by the Coalition for a New Chicago, are part of the same group that disrupted holiday traffic on Black Friday and Christmas Day. They call the protest "Black Wall Street" and chose to march on Friday because it's Dr. Martin Luther King's birthday.

Less than a dozen people took part in the demonstration outside the Chicago Board of Trade, but their message was loud. They aimed to prevent employees from entering and prevent money from trade profits from flowing in the city.

"What we want to do is to bring the pain from the inner city to downtown. Many of the folk here at the Board of Trade - where billions of dollars are transacted every day - many of them are not aware that there are people in neighborhoods outside of downtown who don't have schools, who don't have hospitals, who don't have clinics, who don't have adequate infrastructure to live humane lives," said Rev. Gregory Livingston, Coalition for a New Chicago.