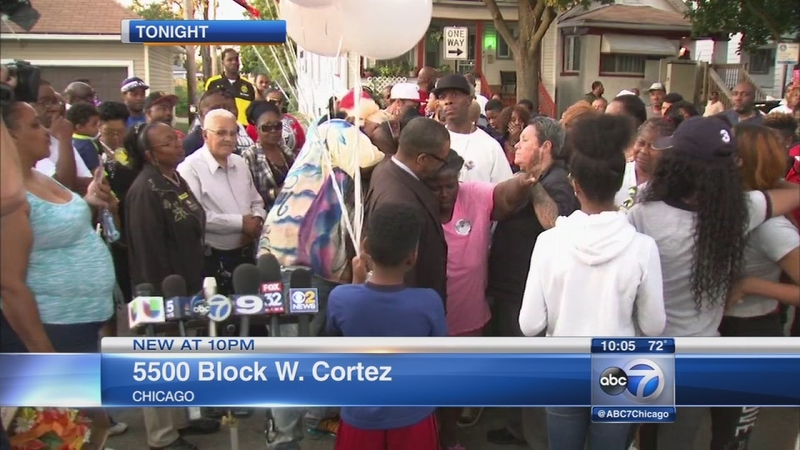 CHICAGO (WLS) -- A body found burned near a garage in Chicago's Austin neighborhood early Saturday morning has been identified as Demetrius Griffin, Jr., 15.

Firefighters responded to the garage fire in the 5500-block of West Cortez Street around 1:25 a.m. on Sept. 17.

Police said the boy was found near a burned garage. Family said he was found in a trash can. Investigators were seen in an alley near the garage searching for evidence. Police have not confirmed that detail.

Griffin's family said he was a freshman at Steinmetz High School and always followed his curfew.

"Once I realized he didn't come in on his curfew, I knew something was wrong," said Polly Sykes, the victim's mother.

At a vigil Tuesday evening, Sykes and Chicago Survivors crisis responder Dawn Valenti pleaded with the public to help investigators and come forward with any information about who may have done this.

"Community, I need your help. They killed my baby out here in this alley. I need somebody, you know something, please come forward. They took my life," Sykes told the crowd.

"What I need this community to understand is when you took this baby's life you affected this whole family. You didn't just take his life. And if you're out here and you see this and you're listening, look at what you did to this family," Valenti said.

"He wasn't a gang member. He was a very respectful kid. He walked everybody in the neighborhood's dogs," Sykes said.

"Don't turn your back this time, y'all. We really need to find the solution or real, I mean, if you all talk about 'Black Lives Matter,' this life did matter," said Virginia Riley, Griffin's great aunt.

Family and friends said Griffin loved dogs, wanted to join his high school swim team, was respectful and close to his parents.

"To come out and see the news trucks and to hear about a body burning and my son is not home, it destroyed me," Sykes said.

Police are conducting a death investigation; the cause of Griffin's death is unknown. Police also issued a community alert as they believe the person who set Griffin on fire may have burned themselves in the process as well.

"These are not TV monsters, video game monsters. They're like the devil. They're out of control. They don't care and don't respect human life," said Ashake Banks, a family friend.

Consumed by grief, older sister Bre Melchor said Griffin was the heart of the family, the baby who was loved by everyone. Above all, his family is quick to point out, this was not just another kid gone wrong.

"I don't know who would have the heart to kill this baby. What did he do to you all? That was not called for. I know he was scared and he was alone and he needed somebody," Melchor said.

On Friday, another body was found inside a burned garage in the Pilsen neighborhood, but the two cases appear to be unrelated. Anyone with information in either case is asked to contact police.