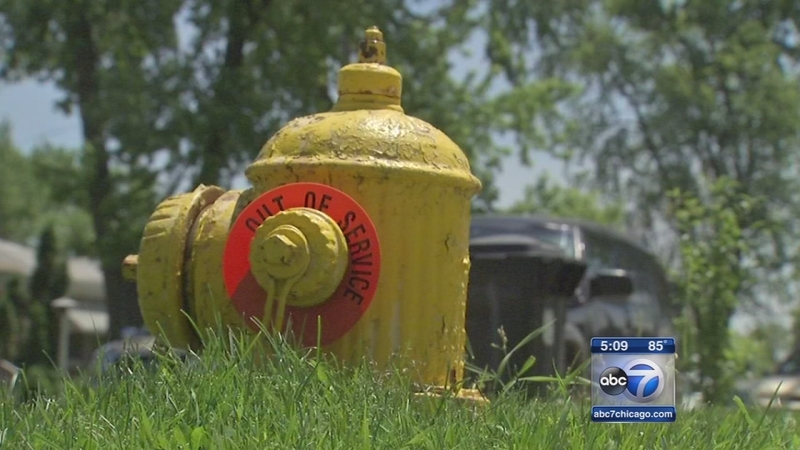 CHICAGO (WLS) -- For firefighters, every second counts when battling a blaze. But what if the fire hydrants on the block aren't working?

Fire officials say that broken hydrants are fixed within days or even hours in the city of Chicago, as dictated by safety protocols. But that's not the case in south suburban Harvey.

Harvey residents Gregory and Kathleen Lesniewski called say that the only two fire hydrants on their block are "out of service." The closest working hydrant to their home is near a school, almost two minutes away on foot.

The Lesniewski's and other residents say one hydrant has been broken since December and the other for almost a year. They say their calls to Harvey city leaders were ignored.

"We asked, we almost begged for help," said Kathleen, "and they turned their back on us."

An I-Team investigation found that about 40 hydrants out of about 1,000 in Harvey are "out of service" and on a city repair list, including the hydrant in a residential area that is just steps away from the Harvey Fire Department headquarters.

Broken fire hydrants were also spotted near three different schools, including one laying on the ground, and another broken hydrant by a daycare.

Over two weeks I-Team repeatedly requested the exact locations of those non-working hydrants but the City of Harvey spokesperson, Sean Howard, never supplied them.

The Harvey Fire Chief, Jason Bell, insists that the broken ones are peppered throughout the city.

"If one hydrant is not working there is another one close by," said Bell. "When we are responding we come in with at least 750 gallons of water per unit and four units responding."

Bell stressed that he believes the problem doesn't pose any danger to residents.

"Every second every second does count," he said, "and that's why we label the hydrants that are out of service."

The chief blames an aging city infrastructure and says most of the hydrants will be repaired with money from a federal grant.

As for the Lesniewski's street, just this week Harvey's city workers dug up one of the non-working hydrants and replaced it with a new one.

"We are very thankful the I-Team got out here and got something done," Gregory said.

The rest of the Harvey hydrants should be fixed within the next several months.

It's important to mention that although the City of Chicago has a lot more money and resources, Chicago fire officials do stress the importance of fixing hydrants quickly and say there should always be at least one working on every block.

There are no official Illinois fire marshal guidelines on this issue.