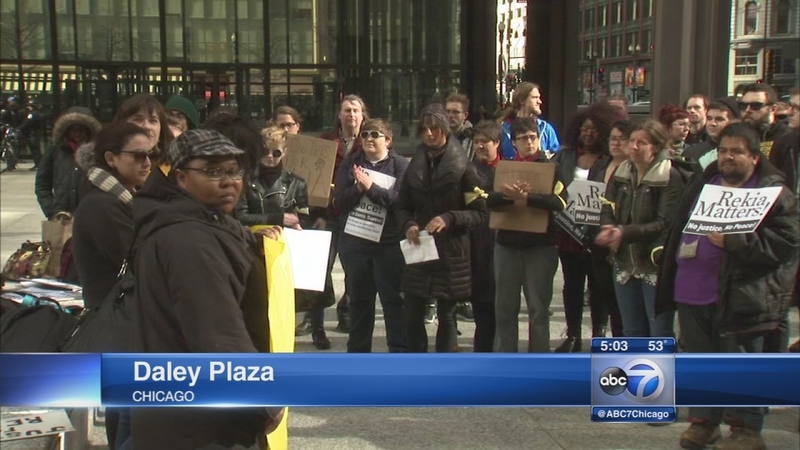 CHICAGO (WLS) -- People gathered in Daley Plaza Tuesday to protest the not guilty verdict against a Chicago police officer charged with killing an unarmed woman.

Rekia Boyd died when Detective Dante Servin fired into a group of people on the West Side back in March 2012. He had asked the group to quiet down. Servin said he thought someone in the group was coming at him with a gun.

"The evidence presented in this case does not support the charges on which the defendant was indicted and tried," Judge Porter said.

Servin was charged with involuntary manslaughter.

"Judge Porter is one of the most respected and experienced judges in the building and I think he was visibly angry that the defendant was not charged with murder," said Richard Kling, Chicago Kent College of Law.

"The anger may very well be misplaced at Judge Porter in this case. I think he was put into a box by the charging decisions in this case," said Sam Adam Jr., a criminal defense attorney.

Criminal defense attorneys say the anger should be placed towards Cook County State's Attorney Anita Alvarez for not charging Servin with murder.

"When I decided to bring charges on this case, it was well thought out, we did an extensive review," Alvarez said.

Alvarez says Servin acted recklessly when he fired five shots over his shoulder from inside his car at the direction of four people. Boyd was shot in the back of the head.

Judge Porter says Servin's act was beyond reckless, it was intentional. The judge says the crime, if any, should be first degree murder.

"His analysis is wrong because the Illinois Supreme Court has consistently held that you can perform an intentional act recklessly," Alvarez said.

Critics say Alvarez charged Servin with a lesser charge because he was a Chicago police officer.

"This goes beyond race, this is about the power of the blue," Adam said.

"I'm not going to let police officer get away with a crime. Why would I charge anything if I didn't, if I was trying to protect a police officer? That's ridiculous," Alvarez said.

The shooting took place in March 2012. Servin was charged with involuntary manslaughter over a year and half later. It is a charge that includes probation as a possible penalty.

While there are no more criminal avenues to take, Boyd's family has settled a wrongful death suit for $4.5 million with the city.