Leaders in Chicago's African American community are calling for calm ahead of what could be a contentious week. (WLS)

CHICAGO (WLS) -- Leaders in Chicago's African American community are calling for calm ahead of what could be a contentious week, as the city must release a video showing a white Chicago police officer killing an African American teen.

Nearly 200 strong they came together Saturday to call for peace. Neither the cold nor the snowy weather was going to stop the men of Alpha Phi Alpha, an African American fraternity which counts many of the city's leaders among its ranks.

"We want people to see the positive professional males that are in our community," said Rev. Roosevelt Watkins, Pastors United for Change.

The fight against violence was top of mind Saturday, but also a growing concern regarding the impending release of dash cam video showing the fatal shooting of 17-year-old Laquan McDonald last October. Officials say he was shot 16 times, some gunshots hitting him after he had fallen on the pavement.

"Chicago is on the tipping point," Rev. Watkins said. "We can be just like Ferguson."

Earlier this week a Cook County judge ordered the video be released against the city's wishes. The police officer in question is on desk duty while the city completes its investigation. The Rev. Jesse Jackson has called for the officer to be indicted and said a top-to-bottom change is necessary in both the Chicago Police Department and the State's Attorney's Office.

"I have high regard for McCarthy as a person, but his job, he's lost credibility," Rev. Jackson said. "The police department is no longer credible."

Police say McDonald was carrying a knife. The shooting took place while officers responded to a report of vehicle break-ins in a trucking yard. The dash cam captured the end of the confrontation. Many fear its viewing might spark riots similar to those seen in other parts of the country.

"As incendiary as this video may be, and we've all heard the rumors, remain calm," said State Rep. Elgie Sims (34th District). "Don't incite violence in our community. Or exact violence on our community. Let's use that energy in a positive way."

The city has until Wednesday to release the video.

Cook County State's Attorney Anita Alvarez says a decision is expected next week on whether to charge the officer in McDonald's shooting. Alvarez says she is not opposing the release of the video.
Related topics:
police shootingchicago police department
Copyright © 2020 WLS-TV. All Rights Reserved.
RELATED 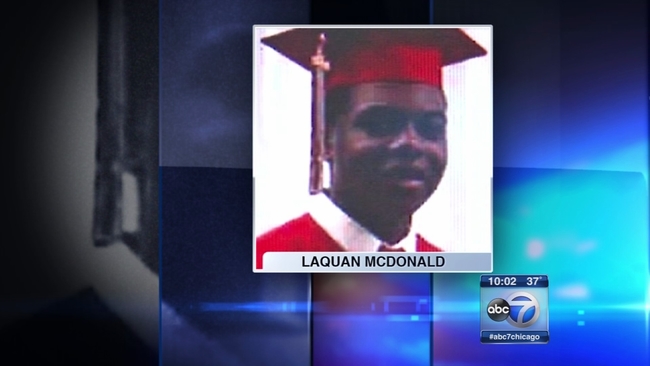