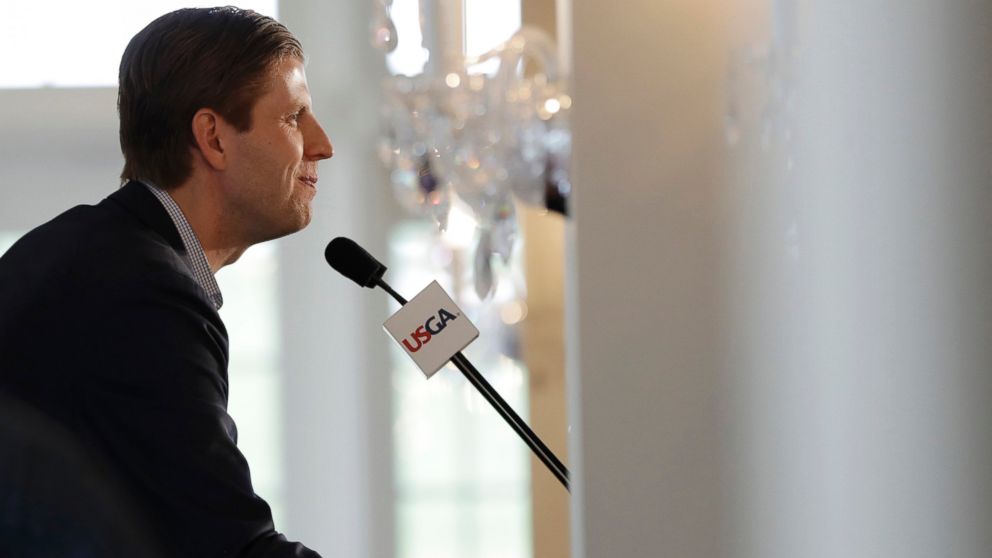 Eric Trump is slamming a Forbes report that alleges his charity, the Eric Trump Foundation, has been funneling donations -- from donors who believed the money was going to St. Jude Children's Research Hospital -- to the Trump Organization by paying high sums for use of Trump properties during fundraisers and redonating some funds to charities friendly with Trump interests.

Forbes reported Tuesday that the Eric Trump Foundation paid the Trump family business hundreds of thousands of dollars over the last seven years for use of one of the organization's golf courses, funds which he claimed were being donated nearly in full to the children's cancer charity.

"We were able to come up with this concept of raising a lot of money with really no expense and it's because we were incurring the expenses at the assets we were taking on the expenses as Trump. We were using our own facilities," Eric told donors in a promotional video.

According to IRS filings, the Eric Trump Foundation in 2012 spent $59,085 on its annual Golf Invitational fundraiser held at the Trump National Golf Club in Westchester County, New York -- money that skimmed from donations to St. Jude's Children's Research Hospital. Those expenses ballooned to $230,080 in 2013 and to $242,294 in 2014, according to the filings. It is unclear from these tax forms how much of those payments went to the Trump Organization.

Forbes reported that in 2011, costs for Eric Trump's golf tournament fundraiser tripled because his father realized that the organization had not been charging for the event and there were no bills to prove it. The Foundation declined to provide Forbes with an itemized list of expenses for the tournament.

Charity experts told Forbes that the amount paid to the Trump Organization for a golf tournament fundraiser for St. Jude's "defy any reasonable cost."

The increased costs for the tournament coincided with changes to the Foundation's board in 2010, when it changed from being made up of mostly Eric's personal friends to those closely connected with the financial interests of the Trump Organization, according to Forbes.

The tax filings also show that the Eric Trump Foundation made a 2014 payment of $87,665 to another Trump property, the Trump National Golf Club in Washington, D.C., for fundraising events.

In addition, the Forbes report claims that Eric Trump's charity redirected some donations. More than $500,000 was given by the Eric Trump Foundation to other charities, "many of which were connected to Trump family members or interests," according to Forbes.

In a statement released Tuesday, a spokesman for the president's son defended the Eric Trump Foundation.

"During the past decade, the Eric Trump Foundation has raised over $16.3 million for St. Jude Children's Research hospital while maintaining an expense ratio of just 12.3 percent," the statement reads. "The Eric Trump Foundation was also responsible for building a $20 million dollar ICU which treats the sickest children anywhere in the world suffering from the most catastrophic terminal illnesses."

The statement continues, "Contrary to recent reports, at no time did the Trump Organization profit in any way from the foundation or any of its activities. While people can disagree on political issues, to infer malicious intent on a charity that has changed so many lives, is not only shameful but is truly disgusting. At the end of the day the only people who lose are the children of St. Jude and other incredibly worthy causes."

And as Forbes points out in its report, "Altruism as a business-development strategy isn't necessarily illegal. But a situation in which outside donor money is redeployed away from the core mission in ways that seem to ultimately benefit the family that pays the majority of the board is -- at best -- an appearance problem."
Report a correction or typo
Related topics:
abc newsnational
Copyright © 2022 ABC News Internet Ventures.
TOP STORIES
Chicago, NW Ind. could see 6 inches of lake effect snow overnight
IL reports 14,422 new COVID cases, 149 deaths
Lower Wacker shooting of carjacking suspect caught on video: sources
Chicago police investigating suspicious object in Loop
Chicago parents hope some good can come from son's death
PA woman shot by man who followed her home after bump at market: cops
Toddler credited with saving family of 7 from devastating house fire
Show More
CPS teacher killed in murder-suicide was active in violence prevention
Bears hiring Matt Eberflus as new head coach
11-year-old boy charged in Mt. Greenwood carjacking: CPD
2 charged in murder of girl,8, in Little Village denied bond
Laquan McDonald's grandmother calls for Van Dyke to stay in prison
More TOP STORIES News