WLS
By John Garcia
CHICAGO (WLS) -- It appears calls for an investigation into how the Chicago Police Department operates are being heard, ABC News reports that the U.S. Justice Department will launch a probe following the shooting death of 17-year-old Laquan McDonald.

As the Department of Justice stands poised to launch the federal probe into the Chicago Police Department, heads continue to roll in the city. The latest is the chief administrator of Independent Police Review Authority, the agency that looks into allegations of police misconduct.

Eleven days. That's how long it's been since the now infamous dash cam video showing McDonald being shot 16 times by a Chicago police officer was released and the protests surrounding it show no sign of slowing down. Sunday, hundreds of people marched down State Street.

"It's not enough to be angry," Marianne Jordan. "We have to be out here and do whatever we can. Boycott, whatever it takes to get those people out of office. Liars and traitors."

Their voices are not going unheard, as ABC News has learned that the Justice Department will announce this week that it stands ready to launch an investigation into the Chicago Police Department and whether its practices violate federal law.

This comes just five days after Illinois Attorney General Lisa Madigan called on the DOJ's civil rights division to do just that. ABC7 legal analyst Gil Soffer says the investigation will likely be both exhaustive and intrusive.

At a West Side church, reaction to news of the impending investigation while calling on the police department to embark on a top to bottom reform.

"We're extremely pleased about that," said Bishop John Bryant, African Methodist Episcopal Churt. "I do not think that the Chicago police, they have proven over this past year, they cannot police themselves."

The Chicago Police Department would not comment on the investigation Sunday night, letting the city do it instead. A spokesperson for the mayor released a statement that read in part: "We welcome the engagement of the department of justice just as we work to restore trust in our police department and improve our system of police accountability." 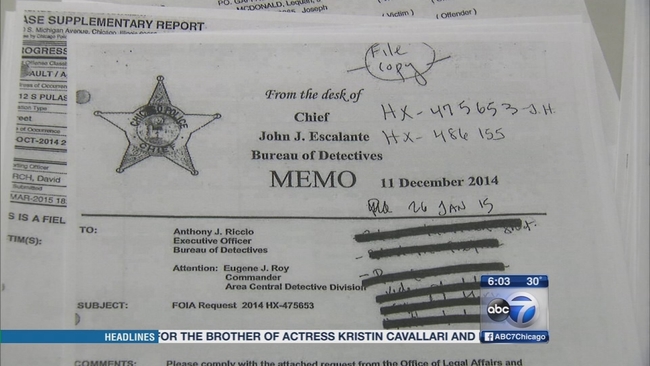