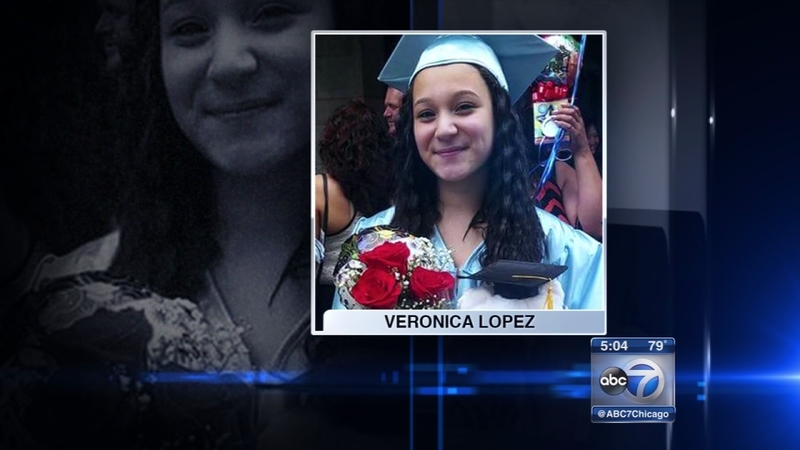 CHICAGO (WLS) -- Two people were shot, including a 15-year-old girl who was killed, early Saturday while in a vehicle traveling along Lake Shore Drive near Fullerton Avenue on the city's North Side, police said.

Veronica Lopez, 15, who was a freshman at North-Grand High School in Chicago, was fatally shot, according to the Cook County Medical Examiner's Office. A 28-year-old man driving the vehicle with Lopez sustained non-life-threatening wounds.

Police are searching for the shooter. Police believe the shooting was likely gang-related, and the male driver was the target of the shooting.

Lopez was one about 12 people shot, at least three of whom fatally, since Friday evening - a violent start to the Memorial Day weekend in Chicago.

Her mother, Diana Mercado, was distraught Saturday. Through sobs, she said "All this killing is so stupid."

The victims were inside a Jeep Cherokee around 1:30 a.m. when a black Nissan pulled up to them and someone inside opened fire, police said. Lopez was shot multiple times. The 28-year-old man in the car with her was shot in the arm and sustained a graze wound to the head.

The man was able to drive to St. Joseph's Hospital where he was treated for his injuries. Lopez was rushed to Illinois Masonic Hospital, where she died.

"Two people shot inside of a vehicle, and the circumstances surrounding that has to be determined by the Chicago Police Department. Our responsibility is just to work with the family, comfort them to the next step from here to the medical examiner's office, and go on with the process from there," said Andrew Holmes, community activist.