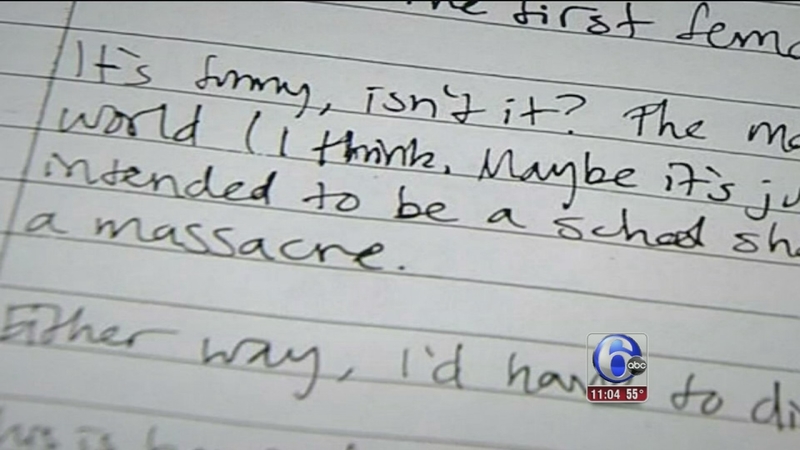 RADNOR TWP., Pa. -- Police arrested a 17-year-old female senior at Radnor High School Monday after administrators were alerted that she was writing about a mass shooting in her two notebooks.

The targets were fellow students and a certain teacher.

"It was kind of frightening because those events have happened in other places and you don't want it to happen in your hometown, but realistically it can happen to anybody," senior Alex Bowden said.

"I could be the first female school shooter...I'd want to trap them, pick them off one by one."

Investigators searched her locker and home, but found no weapons.

"She did have a fascination with serial killers. And she did a lot of reading about torture, but the most disturbing factor is she had a fascination and keen interest on the Columbine shooters," Radnor Township Police Superintendent Bill Colarulo said.

Colarulo says the teen who has a history of mental health treatment also wrote letters to the parents of the shooters of the Columbine tragedy saying she identified with the mass murderers.

"How do you know when to take this serious or when to dismiss this as something no more than a harmless prank?" Colarulo said.

The 17-year-old is undergoing a psychological evaluation, but she will be charged with making terroristic threats.

Because she is a minor, her name will not be released.

Police say her parents are cooperating with the investigation.

The school notified parents on its website about this incident and another.

Police say a male student with autism was also taken into custody Monday for making threats, but that case is still under investigation.

The news and fear spread quickly in the halls.

"The rumors that were going around. These kids had to know the truth and the facts because they don't want to go to school," parent Debbie Singer said.